LG UP80 UHD TV Review: Know will this 55 inches smart TV from LG be a better option? 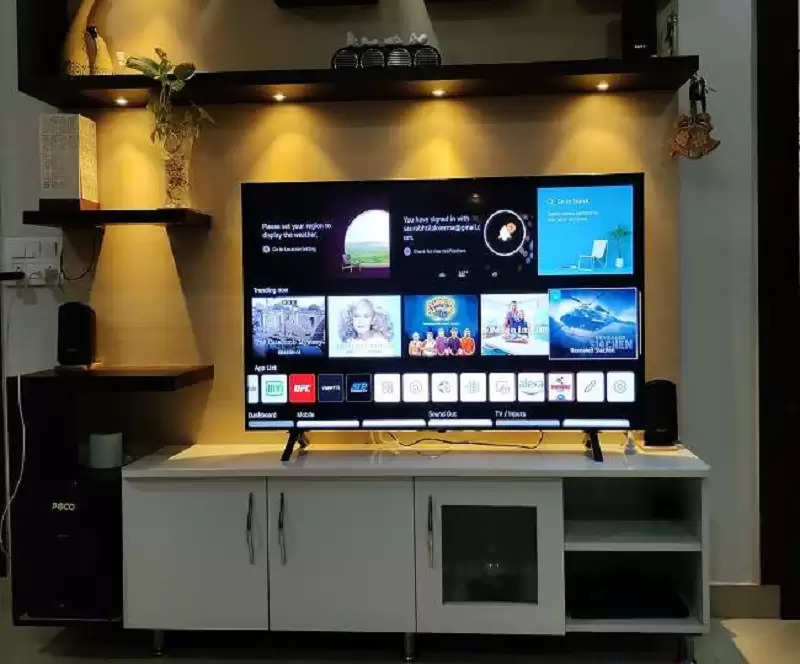 LG has always occupied the leading position in the television market. However, in a country like India, in the last few years, many new smart TV brands have entered at an affordable price point. But despite this, the demand for LG Smart TVs has not decreased. Recently, LG has launched a long series of new smart TVs in India. Under the LG UP80 series, the company has introduced almost half the recorded smart TVs. It has smart TVs of 55, 65, and 75-inch screen sizes. We have brought a review of 55-inch screen size smart TV of the same series, know whether buying LG's 55 inches smart TV can be a better option for you.


LG's new 55-inch Ultra-HD TV has a 3 sided cinema screen design. There are light bezels at the bottom of the TV, which have LG branding on them. A flat-display has been given on this smart TV. Also, the rear panel is almost flat. The back panel is quite simple, neat, and clean. Overall, at first glance, the Smart TV looks flat. If you are looking for an ultra-sleek smart TV, then this can be a better option. Apart from this, optical digital output, HDMI3, USB IN 2, and LAN port have been given on the back panel of the TV itself. Also, PowerPoint is given. They all come with an inside cutout for the ports. Due to which extra space is not required when the Smart TV is mounted on the wall.

The LG UP80 UHD Smart TV has a 4K Ultra-HD edge-to-edge display. Meaning the bezels are non-existent. The resolution of a Smart TV is 3840 * 2160 pixels. It gets 4 times more pixel accuracy than Full HD TV. Smart TV has a good viewing angle. Because of this, there is no problem with watching TV even sitting on the side. It has HDR support, which highlights images and videos well. 903:1 contrast ratio has been given in Smart TV.

Vibrant color and contrast are available in LG Smart TVs. Also, the TV upscales the resolution image to 4K or near it. AI brightness control has been given in Smart TV. With its help, the TV automatically manages its brightness according to the surrounding light. Smart dimming control and pixel compensation algorithm in the TV improves the contrast ratio of the TV with dark images. The TV's sensors manage color depth, detail, contrast brilliantly. Which gives great picture quality. TV is a great option for gaming and web browsing.

LG UP80 Smart TV has an intelligent 4K quad-core processor. The TV comes with active HDR as well as 60 Hz refresh rate support. Also comes with Advanced Color Enhancement and HDR Dynamic Tone Mapping. Smooth performance is available in LG Smart TV with this setup. It comes with low latency. This gives you a great gaming experience while gaming. The TV can be optimized for gaming. If you want to use it as a desktop too, then this will be a better option. The TV has its own LG WebOS. Its user interface is very neat and clean. Also, access to many settings and apps has been given on the home page. Also, users have been given the option to install apps according to their needs. You will be able to access Weather and Mail on the home page. Also, options like Dashboard, App List, AirPlay, User Guide are given. The energy-saving mode has also been given in the TV.

A new Magic Remote has been given with LG's TV. In this magic report, separate buttons have been given for many OTT apps like Netflix, Amazon, Disney Hotstar. Also, a scrolling button has been given like a mouse in the remote. Not only this, if you do not want to scroll, then the TV can be played by giving voice commands. Google Assistant has been supported for this. Apart from this, Alexa has been supported. The remote is good enough to hold. In such a situation, Magic Remote makes you feel a great experience.

All the smart features needed in LG Smart TV like LG AI ThinQ have been given. With the help of which you will be able to use your mobile as a remote. Also in-built Google Assistant, in-built Amazon Alexa, and AI function like AI UX, AI Home, AI Recommendation, Intelligent Edit, Conversational AI have been given.

The TV has a 20W audio output. Also, the speaker has been introduced with many modes. The speakers of the TV are on the bottom. A clear voice is available on TV. Also, AI Acoustic Tuning has been supported. The TV comes with noise reduction feature support. In such a situation, the TV reduces the noise outside. There is no problem with listening to loud music on TV. TV Sound Mode Share has been given in Smart TV so that users will be able to play the phone's audio on the TV. Wireless connectivity has been given to connect the speakers separately from the TV, which is a good option. Many audio modes have been given in it, with the help of which users can enjoy music and movies.

As a connectivity option, Wi-Fi standard, Bluetooth, HDMI, Share and Control, Magic Mobile Connection features have been given in the TV. Connecting the TV to the speakers with the help of Bluetooth is quite easy. The Smart TV has HDMI 2.0, HDMI 2 port.

If you want to buy Smart TV for multi-use. Means want to do AI-enabled smart connectivity and web browsing in addition to watching Ototi apps in Smart TV. Also, if you want to use it as a desktop when needed, then 55 inches Smart TV of LG UP80 can prove to be a great option.