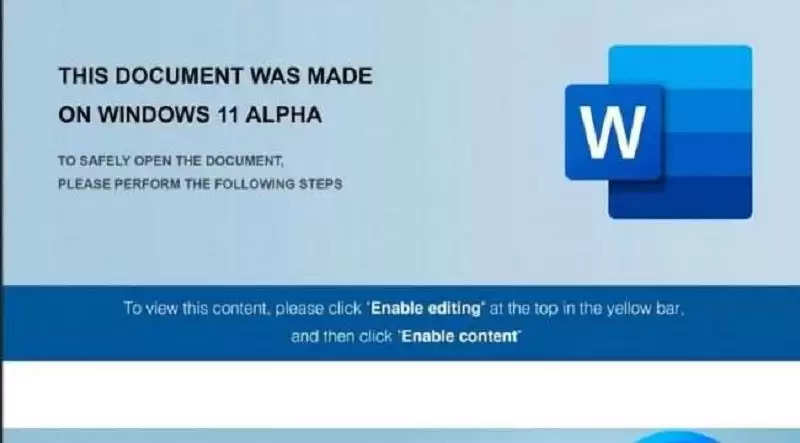 A Windows 11-themed malware campaign has reportedly been discovered by security researchers at cybersecurity firm Anomaly. Details about the Windows 11 alpha campaign were first reported by Bleeping Computer, and according to researchers, cybercriminals are relying on a tried-and-tested hack to carry out the campaign. This is the use of a Microsoft Word document that has been corrupted with Javascript that could allow hackers to distribute and potentially run any other malicious code on the device.


According to researchers, they have discovered six malicious Windows 11 Alpha-themed Word documents that are being used to "skip JavaScript payloads, including JavaScript backdoors". Anomaly also believes that cybercriminals group FIN7 could be behind the latest threat. FIN7 is an Eastern European Threat Group that targets organizations globally, particularly American ones. According to researchers, this cyber threat group is responsible for more than 15 million payment card thefts, which have potentially cost organizations more than $1 billion in losses.


The campaign targets people who are not familiar with Microsoft's upcoming operating system. It reportedly uses a Word document, which is themed after Windows 11 Alpha, and asks users to open it. If a user does not suspect anything is wrong, he will activate the code, which will further allow cybercriminals to steal people's financial information.


Anomaly security researchers reported that an image may appear with Windows 11 Alpha asking users to "Enable Editing" and "Enable Content" to begin the next phase of activity. Users will be asked to make the document compatible with the current operating system they are using.

However, there is no Windows 11 alpha and if anyone is not aware of it, users can follow the prompt from the malicious campaign. The report claims that for those who follow the prompt, the code will be activated which will then download a JavaScript backdoor. This would allow hackers to obtain a payload on the PC, which could then be used to steal sensitive information, especially debit or credit card details.

It should be noted that Windows 11 will release on October 5th and is currently available to Windows Insider Program members, developers, and beta testers.