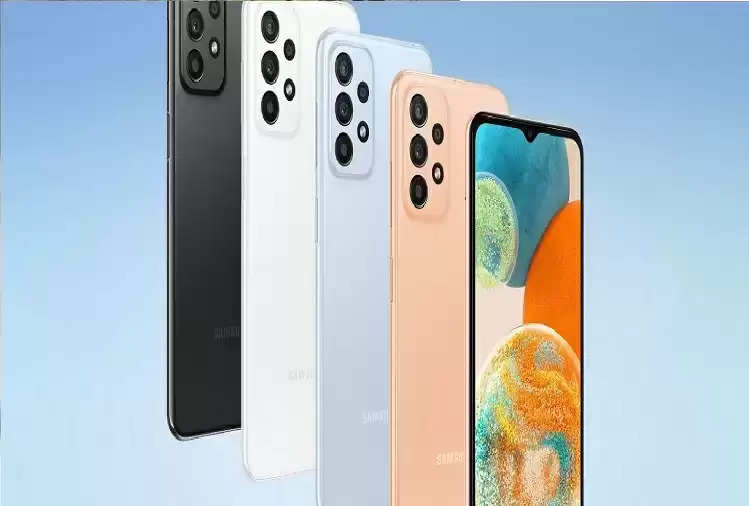 Samsung has quietly launched Samsung Galaxy A23 5G as its latest smartphone. The smartphone has been listed on the company's official website along with some specifications and images. The Galaxy A23 5G sports a 6.6-inch Infinity-V display with a full-HD+ resolution. It runs on One UI 4.1 based on Android 12.

However, Samsung has not given any information about the processor. The company simply said that the phone is equipped with an octa-core chip. Apart from this, the phone packs a 5000mAh battery, and there is Bluetooth v5.1 and dual-band Wi-Fi support for connectivity. Let us know in detail about the price features.

Price of Samsung Galaxy A23 5G

At present, the company has not given any information about the price and availability of the Samsung Galaxy A23 5G. It is expected that its price can be around the A22 5G that came last year. In fact, the Galaxy A22 5G was launched in India in July last year with a price tag of Rs 19,999 for the 6GB RAM + 128GB inbuilt storage variant. While its 8GB RAM + 128GB inbuilt storage variant was priced at Rs 21,999. Hence, we can expect Samsung to price the new Galaxy A23 5G the same.

Features of Samsung Galaxy A23 5G

The storage can be expanded up to 1TB via microSD. While Samsung is yet to reveal the name of the chipset, the company has only revealed that the Galaxy A23 5G will be equipped with an octa-core chip.

For photography, the Samsung Galaxy A23 5G packs a quad rear camera setup that includes a 50-megapixel primary sensor, a 5-megapixel ultra-wide angle lens, and a 2-megapixel macro lens, and a second 2-megapixel depth sensor.

The primary rear camera also gets optical image stabilization support. On the front, the handset houses an 8-megapixel selfie camera with an f/2.2 aperture. The company said that the availability of camera sensors may vary according to the market.