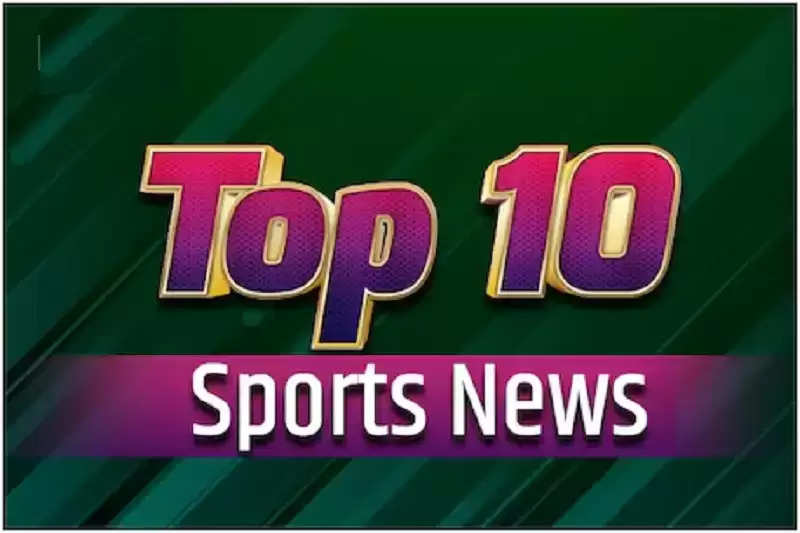 Top 10 Sports News: Team India could not start well in the third and final Test. The team was reduced to 223 runs in the first innings. Captain Virat Kohli scored the highest 79 runs. The big news is coming out about IPL. Now instead of Chinese mobile company Vivo (VIVO), Tata will be the title sponsor of IPL.

New Delhi. Team India could not make a big score in the third test even after Virat Kohli's good innings. The team returned to the pavilion after scoring 223 runs in the first innings (India vs South Africa). Captain Kohli (Virat Kohli) scored 79 runs. But he did not get the support of other players of the team. Due to this, he could not complete the century. The big news is coming about IPL 2022. Vivo has withdrawn from the title sponsorship. In his place, Tata Group will be the title sponsor of IPL from next year. IPL chairman Brijesh Patel has confirmed this in a conversation with the news agency.

Australian Cricketers' Association (ACA) chief Todd Greenberg has assured the country's cricketers that he will accompany them to Pakistan if the tour is finalized, but if "one or two" players withdraw from the tour. So he respects his decision. If the team gets a security clearance to travel, it will be Australia's first tour of Pakistan since 1998. At that time Mark Taylor's team won the 3-Test series 1-0 in Pakistan.

The team of Patna Pirates has reached the top of the points table of the Pro-Kabaddi League. The team easily defeated U Mumba in their eighth match. Gujarat got the victory in another match.

Team India is on the doorstep of South Africa these days. The third Test (India vs South Africa) started between the two on Tuesday. A three-match ODI series is to be played between the two countries from January 19. The players included in the ODI team will leave on Wednesday morning. Earlier bad news has come for the team.

Off-spinner Washington Sundar is Corona positive. In such a situation, it is difficult for him to go to South Africa. Due to this, he will not be able to enter the series as well. KL Rahul will be seen captaining in the ODI series. Rohit Sharma is already out due to injury.

The last Test of the 3-Test series is to be played between India and South Africa in Cape Town from today. Earlier, South Africa's legendary all-rounder Chris Morris announced his retirement from all forms of cricket. Morris informed the fans about this by writing a post on his Instagram account. Morris will now try his hand at coaching.

The most special and big thing of IPL 2022, which everyone is waiting for. The BCCI has made its position clear regarding that. The Mega Auction of IPL (IPL 2022 Mega Auction) will be held next month. Corona cases are increasing continuously in the country. In such a situation, there was doubt about the dates of the auction. This time 10 teams are landing instead of 8 in the T20 league.

New Zealand pacer Kyle Jameson was on Tuesday fined 15 percent of his match fee for using "inappropriate language" after dismissing Yasir Ali during the finished second Test against Bangladesh in Christchurch.

Actor Sidharth, who won accolades for his role in the Bollywood film 'Rang De Basanti', has found himself embroiled in a major controversy over a tweet he posted for Indian badminton star Saina Nehwal. While Sidharth was heavily criticized for his 'derogatory' tweet, Saina's father has also hit out at the actor. Law Minister Kiren Rijiju has condemned actor Siddharth's objectionable remarks on Olympic medalist badminton player Saina Nehwal, saying such remarks show the "uncivilized mindset" of the person.

Young shuttler Ashmita Chaliha made her first upset of the tournament by defeating fifth seed Yevgenia Kosetskaya while top seed PV Sindhu also made it to the second round of the women's singles at the India Open here on Tuesday. Unseeded Chaliha beat world number 28 Russia 24-22 21-16 in just 31 minutes while two-time Olympic medalist Sindhu defeated compatriot Sri Krishna Priya Kudravali 21-5 21-16 in the first round. defeated by Chirag Sen, however, lost 8-21 7-21 to Soong Ju Wen of Malaysia in the first round of men's singles.

Australian Open organizers have named top-ranked player Novak Djokovic as the top seed for the Grand Slam tournament starting Monday at Melbourne Park, despite uncertainty over his role. As expected, domestic talent and top-ranked Ash Barty have been seeded number one in the women's singles draw. The draw list was released on Tuesday in which defending champion Naomi Osaka is the 13th seed.