IPL 2021 Points Table: Rajasthan's 'game over', know what was the big change in the points table? In the match played at Dubai International Stadium, Rajasthan Royals were defeated by Royal Challengers Bangalore by 7 wickets. After this defeat, Rajasthan's hopes of reaching the playoffs have become bleaker.

New Delhi. In the 43rd match of IPL 2021, Royal Challengers Bangalore defeated Rajasthan Royals by 7 wickets in a one-sided fashion. Batting first, Rajasthan scored 149 runs in 20 overs in the match played at Dubai International Stadium. Bangalore achieved this target in just 17.1 overs by losing 3 wickets. Glenn Maxwell scored an unbeaten 50 off 30 balls in Bangalore's victory. Sreekar Bharat played an innings of 44 runs. Apart from this, Bangalore bowler Harshal Patel took 3 and Yuzvendra Chahal-Shahbaz Ahmed took 2-2 wickets. Let us tell you that after this victory of Bangalore, there has been a big change in the IPL Points Table (IPL 2021 Points Table).

There is no change in the first two positions in the IPL 2021 Points Table. Chennai and Delhi have 16 points each. Chennai is first and Delhi is second. At the same time, Bangalore has improved its net run rate by registering the 7th win in 11 matches. Bangalore's net run rate had fallen significantly after the crushing defeat to KKR but now it has 14 points. The net run rate of Bangalore is now -0.200. Not only this, after this victory, he has made a distance of 4 points from his closest rival Mumbai Indians and Kolkata Knight Riders. 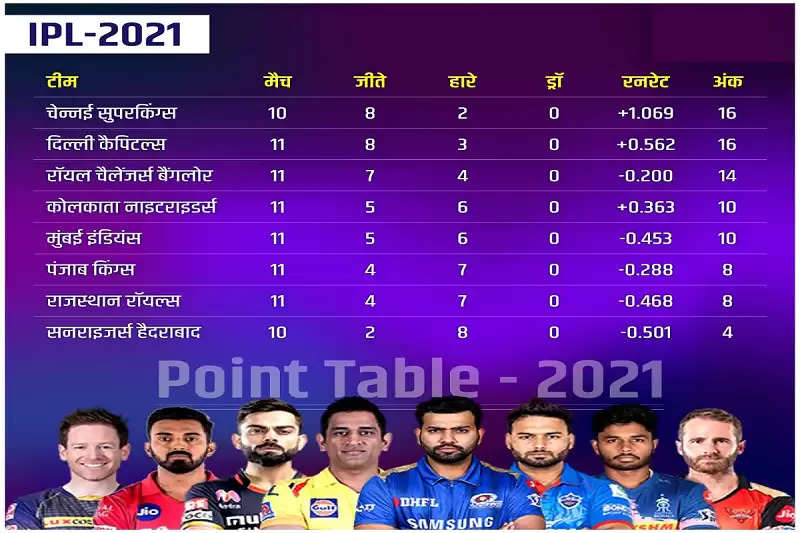 Talking about Rajasthan Royals, the defeat against Bangalore has given a blow to their playoff hopes. Rajasthan now has only 8 points in 11 matches. And his net run rate has also dropped to -0.468. Now this team will have to win the remaining three matches by a huge margin to reach the playoffs. Seeing the form of the team, it seems impossible to happen.

By the way, the race for the playoffs has become more exciting now. The fight is for number four in which there is a tough competition between Kolkata-Mumbai and even Punjab, Rajasthan cannot be kept out of it.