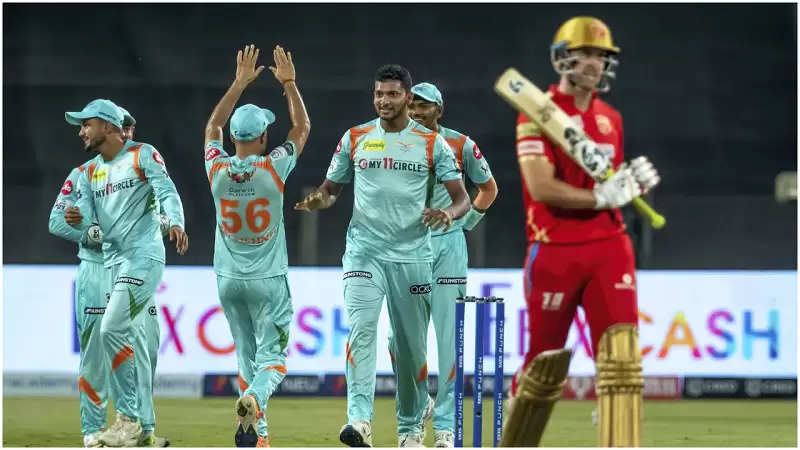 Liam Livingston is the reason behind Punjab King's defeat?

Lucknow Supergiants beat Punjab Kings by 20 runs, and PBKS could not even achieve the target of 154. Virender Sehwag considered Liam Livingstone to be the biggest culprit of this defeat.

When there are only 154 runs to be scored and you have stormy batsmen like Shikhar Dhawan, Mayank Agarwal, Jonny Bairstow, and Livingston in your team, then you should win. But despite this, Punjab Kings lost the match that was won. That too by full 20 runs. IPL matches against Lucknow Supergiants (IPL 2022) The poor batting of Punjab Kings sank his booty. At one time the team was easily seen winning the match but in the end, it was defeated. There are many reasons for the defeat of Punjab Kings but former cricketer Virender Sehwag (Virender Sehwag) Rajasthan Royals’ most expensive player Liam Livingston blamed it (Liam Livingstone) But boil.

Liam Livingston scored 18 runs in 16 balls against Lucknow Supergiants. Livingston was frozen at the crease and he had hit two sixes in the same over of Ravi Bishnoi but then in the 13th over he lost his wicket by playing a very bad shot and after that Punjab started moving towards defeat. Virender Sehwag was very upset with Livingston’s shot selection and he termed his wicket as the turning point of Punjab’s defeat.

In a special conversation with Cricbuzz, Virender Sehwag said, ‘The worst I got was the wicket of Livingston. You can hit six in front. You can hit a six on the bridge. If you can hit a six on the cut, then why are you getting out after playing these reverse shots. Had Livingston kept playing there, the match would have ended an over earlier. Somebody or the other bowler would have come, which Livingston could have redeemed. Let us tell you that Livingston has been bought by Punjab at a great price of 11.50 crores. His responsibility is to make the team win the match but throwing his wicket by playing bad shots is costing the team heavy.

‘Dhawan should have stayed at the crease’

Shikhar Dhawan could only score 5 runs in 15 balls against Lucknow but Sehwag believes that Punjab’s victory was certain if he stayed till the end. Sehwag said, ‘Shikhar Dhawan scored only 5 runs in 15 balls but he should not have been out. Well if the runs were not scored then he should have stood at the crease. Because the score was not high and Mayank Agarwal had given the start fast. If he was standing at the crease, Rajapakse, Bairstow, and Livingston must have walked with him.

Sehwag further said, ’50 runs were needed in the last 5 overs. 5 wickets were left. If Jonny Bairstow was at the crease, Punjab should have won this match. But half of the last 5 balls were dotted by Punjab. In such a situation, Punjab has once again put the ax on its feet.