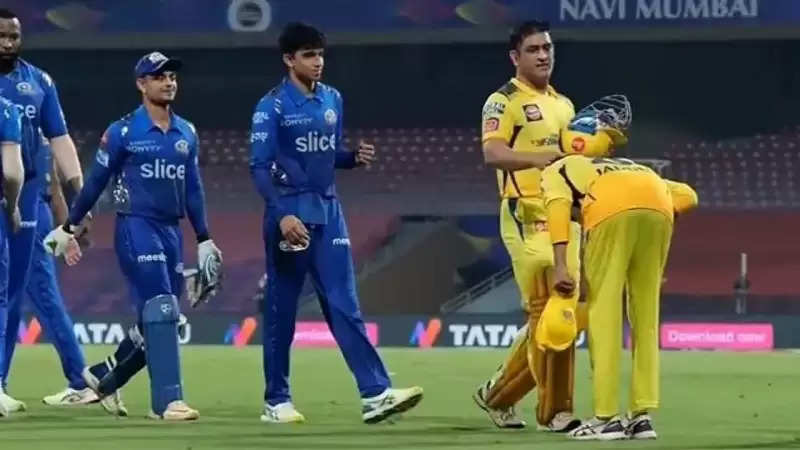 MS Dhoni scored an unbeaten 28 off 13 balls with three fours and a six to give Chennai victory in Mumbai. He scored 16 runs in the last four balls and CSK got their second win in IPL 2022.

Mahendra Singh Dhoni in IPL 2022 Due to stormy batting in the last overs, Chennai Super Kings defeated Mumbai Indians by three wickets. After this result, CSK captain Ravindra Jadeja (Ravindra Jadeja) bowed before him. Along with this, Ambati Rayudu also joined hands after seeing MS Dhoni’s finishing. Mumbai Indians after the result of the match (Mumbai IndiansMany players also became fans of Dhoni’s game. At the same time, the CSK camp was completely shown in his respect. Mumbai Indians had got hold of the match but Dhoni, who was adept at winning the last overs, showed the same old wonder in the end.

When Dhoni was going towards the dressing room after winning the match, Ravindra Jadeja bowed down and saluted him. The CSK captain thanked Dhoni for finishing the match in a way. At the same time, the team’s senior batsman Ambati Rayudu also appeared in the same style. Before shaking hands with Dhoni, he folded his hands and showed that he salutes his ability. The rest of the CSK players were also very impressed with MS Dhoni’s game. A member of the support staff working as CSK’s bat even saluted him.

When Jadeja bowed before Dhoni

What did Jadeja say about Dhoni?

Nobody finishes cricket matches like him and yet again MS Dhoni 28* (13) shows why he is the best finisher. A four off the final ball to take @ChennaiIPL home.

What a finish! #TATAIPL #MIvCSK pic.twitter.com/oAFOOi5uyJ

In the post-match presentation, Ravindra Jadeja spoke openly about Dhoni and the last overs of the match. He said, the way the match was going, we were very tense. But we knew that the great finisher of the game is playing and if he plays the last ball, he will end the match. Dhoni showed the world that he is still the finisher of the match.

What happened in the last overs

CSK needed 42 runs in the last three overs. Dwayne Pretorius (22) hit a six in the 18th over and Dhoni hit a four to add 14 runs. CSK scored 11 runs in the 19th over. In the final over, 17 were to be made in six balls, in which Pretorius (22) was dismissed leg before by Unadkat on the first ball. On the second, Bravo scored a run and Dhoni hit a six towards the site screen and then a four on a short fine leg. Two runs were scored in the fifth ball and four runs were to be scored in the last ball. Dhoni gave the team victory by hitting four comfortably.