Cricket update : Kohli made a flurry of records, went ahead of Sachin 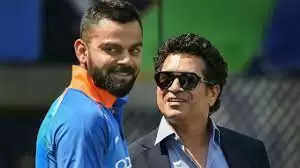 Virat Kohli played an inning of 113 runs in the first ODI against Sri Lanka in Guwahati. Kohli scored the 45th century of his ODI career and the 73rd century in international cricket.

This is Kohli's first century at home since November 2019. This is Kohli's ninth century in ODIs against Sri Lanka, in this case, he left behind Sachin Tendulkar (eight centuries).

Virat scored his 20th ODI century at home, equaling Tendulkar in terms of scoring the most centuries at home.