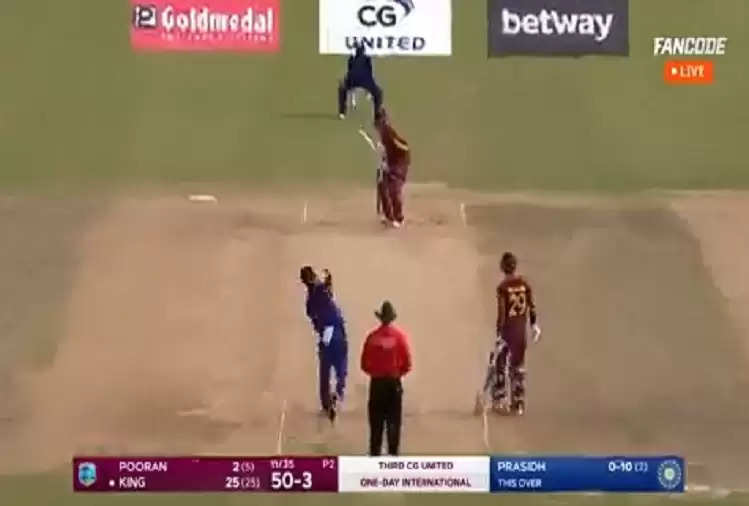 Team India beat West Indies by 119 runs in the third ODI on Wednesday to clean sweep the hosts 3-0. In three ODIs, the Caribbean team could not stop India led by Shikhar Dhawan.

Nicholas Pooran and Brandon King showed their brute force in the third ODI as they hit the famous Krishna for four boundaries in an over.

The incident happened in the 12th over of the West Indies innings, when King hit the first boundary after driving Krishna to a deep point. On the second ball, the batsman directed the ball straight down the ground in the direction of long off, so that he could hit two boundaries in the same number of balls.

Another cut shot from King hit 3 fours one after the other. When King was targeting the off-side boundary, Pooran scored a run towards the leg-side and lifted the fourth boundary of the over.

Talking about the third ODI, after winning the toss, Shikhar Dhawan and Shubman Gill got India off to a bang while deciding to bat first. The former completed his half-century before a rain-caused break halted the game.

Four boundaries in the over! The Windies pull off some mighty shots to put runs on the board.

After the break, Gill continued his attack as he played an unbeaten knock of 98 runs and Shreyas Iyer also contributed 44 runs to post India's total of 225/3 in 36 overs.

Due to several rain delays, the target of 257 from 35 overs was a difficult one for the West Indies, and eventually, West Indies could manage only 137 runs in 26 overs.