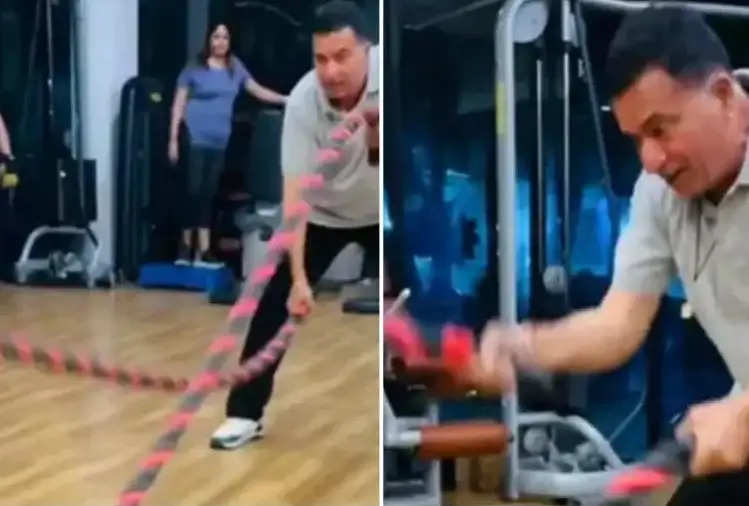 A video of Bollywood actor Vicky Kaushal's father Sham Kaushal working out in the gym is going viral on the internet. In this video, Vicky Kaushal is doing hard exercise in the gym. Hrithik Roshan's father filmmaker Rakesh Roshan has also reacted to this video of him. Viral Bhayani has shared this video on his Instagram account.

In the video, Vicky Kaushal's father Sham Kaushal is seen exercising with a rope. He is doing battle ropes work-out. In which the rope has to be pulled with the strength of the whole body. In this video, Rakesh Roshan wrote, Shamji keeps going.

So far more than 14 thousand people have seen this exercise video of his. Commenting on this video, a fan wrote, He is already a famous stunt director of Bollywood…. Will be fit already... Video has arrived today. At the same time, another user wrote, the Kaushal family has resolved to stay fit on New Year. Katrina Kaif also put a video of the gym a few days back. Action director Sham Kaushal started his career in the 1980s. He has seen his work in films like Krrish (2006), Kaminey (2009), Gangs of Wasseypur (2012), Dhoom: 3 (2013), Bajirao Mastani (2015), and Dangal.

Vicky Kaushal's family has also come into the spotlight after Katrina Kaif's marriage. Recently a video of Vicky's father Sham (Shyam) Kaushal is viral on social media. In this, he is seen working out in the gym. People have made different types of comments on this video. Some people have given fitness credit to Katrina. Although this video looks old. Meanwhile, a comment caught everyone's attention. It is written that Vicky Kaushal's father Sham Kaushal has been accused of 'MeToo'. Let us tell you that Sham Kaushal is the old action director of Bollywood. The allegation against him is of an outdoor shoot in 2006. He has also apologized for this. Know what was the whole matter.

Commenting below this video, a user wrote, this guy was trapped in the MeToo case. On this a user asked, tell me who made the allegation? Another user has replied, Namita Prakash. Significantly, during the MeToo movement in 2018, Sham Kaushal was accused of sexual misconduct. He had also tendered an unconditional apology on this.