Nita Ambani had revealed why the Ambani family lives on the 27th floor of Antilia! Mukesh Ambani and his family are famous for their luxurious lifestyle and wide business. While Ambani belonged to the wealthy class, his wife, Nita Ambani, formerly Nita Dalal, was from a middle-class family. Her father, Rabindrabhai Dalal was a senior executive of the Birla Group. Mukesh Ambani's mother, Kokilaben Ambani had seen Nita at an event and she decided to make the former teacher her daughter-in-law.

Over the years, Nita Ambani has proved that she is not just a millionaire's wife. Not only is she the chairman and founder of Reliance Foundation and a non-executive director of Reliance Industries, but she also owns the Mumbai Indians, cricket team. Nita Ambani is the founder and chairperson of Dhirubhai Ambani International School, Mumbai. She topped the list of 'Asia's 50 Power Businesswomen' in the April 2016 issue. 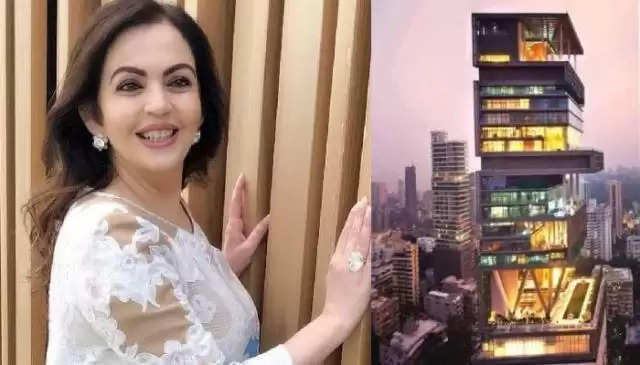 Mukesh Ambani lives with his family at his palatial residence, Antilia, located in Altamount Road, South Mumbai. Antilia is estimated to be the second most expensive property in the world after London's iconic Buckingham Palace. The heavenly mansion of Mukesh and Neeta is estimated to be worth $1-2 billion. The 27-story skyscraper reaches 570 feet against the Mumbai skyline with over 400,000 square feet of interior space. Each floor of the building is the same height as an average 2-story building which gives the feel of a 40-story building. Antilia's architectural design makes it strong enough to survive an earthquake of 8 on the Richter scale.

With luxurious accommodations like Antilia, the Ambani family still lives on the 27th floor, leaving the 26th floor. Mukesh Ambani has lived on the 27th floor with his wife Nita Ambani, his son Akash Ambani and daughter-in-law Shloka Mehta. Mukesh and Nita's second son Anant Ambani also lives with them on the 27th floor. According to a report in Business Insider, Nita Ambani wanted all the rooms to have enough sunlight, and as such, she decided to stay upstairs. It is also said that only close people are allowed on the 27th floor of the building.