Vastu: Take special care of these things related to Vastu while making toilet at home 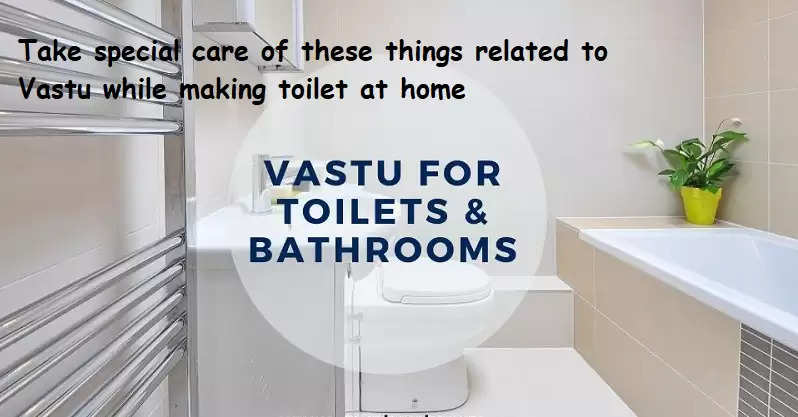 "It is said that while building a house, special care should be taken in which direction the toilet should be. Along with some other important things should also be taken care of. In this article, we are going to tell you some Vastu tips related to the toilet, by adopting You can maintain happiness and peace in the house.

In Vastu Shastra, some rules have been made to organize the house and the things present in it. Happiness and prosperity can be brought to life by following these rules. According to Vastu Shastra, ignoring these rules can cause discord and unrest in the house. Not only this, the family members may also have to face physical problems due to Vastu defects. It has been mentioned in Vastu Shastra in which direction the temple, kitchen, living room, and bedroom should be located in the house. People take special care of the directions regarding kitchen, living room, and bedroom, but most ignore the things related to the toilet. Let us tell you that some things have been mentioned in the scriptures regarding toilets.

It is said that special care should be taken in which direction the toilet should be while building a house. It is believed that for this, apart from the direction, some other important things should also be taken care of. In this article, we are going to tell you some Vastu tips related to toilets, by adopting you can maintain happiness and peace in the house.

Keep these things in mind

1. It is said that special care should be taken of the direction while constructing the toilet in the house. According to Vastu, the toilet should never be built in the North-West direction. Churning curd or other food-related work is done in this direction. That is why this direction is not considered good for defecation.

2. While constructing the toilet, first a pit is dug, for which it is also necessary to have knowledge of the direction. It is said that the pit dug for the toilet should never be dug in the northwest direction. It is said that with this financial problems can start in the house. Sometimes people make this mistake and they do not even realize it. They keep on facing financial problems, such as loss of money or money.

4. For People who have already constructed toilets in the North-West direction, problems related to money often trouble them. Such people should take care of many things while taking a loan. By the way, they should avoid such transactions of money.

(The information given here is based on religious beliefs and folk beliefs, there is no scientific evidence for this. It has been presented here keeping in mind the general interest.)