Sitting on the lap of a boy on a scooter in the middle of the road, the girl kissed 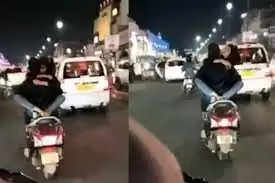 One can see in the video that a couple is kissing each other on a moving scooter. The girl is sitting on the lap of the young man facing back. The youth has been arrested in the case.

Action will be taken against the youth on charges of spreading the Motor Vehicle Act and obscenity. The video of the couple was made by the people following them and posted on social media.

After the video went viral, the police swung into action and managed to find the young man with the help of a CCTV camera. It is seen in the viral video that a young man and a woman are breaking traffic rules on a scooter near the Hazratganj intersection.