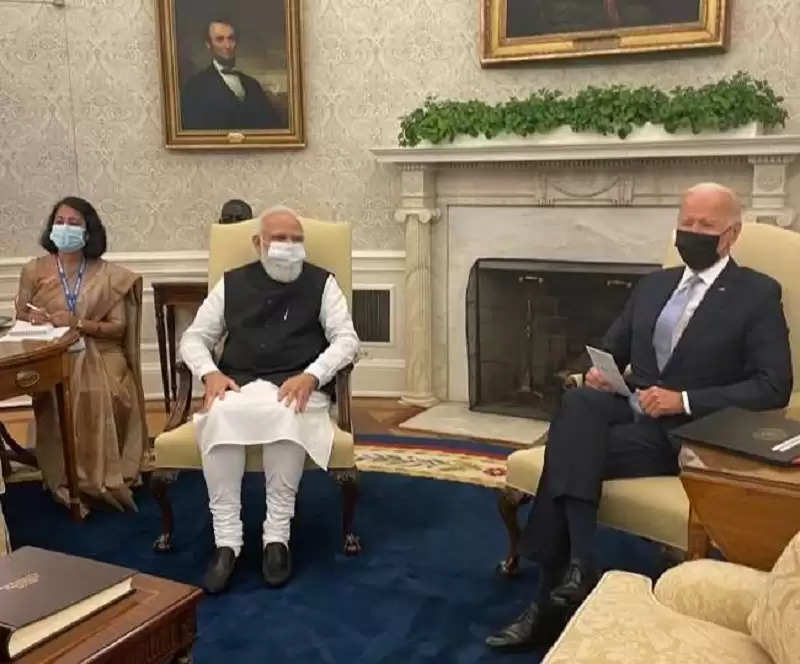 The relations between India and America are touching new heights and heights. This was visible in Prime Minister Narendra Modi's meeting with President Joe Biden on Friday and Vice President Kamala Harris the day before. In their meeting with Harris, the two leaders acknowledged that bilateral relations are in good times. While Modi described the two countries as natural partners, Harris expressed concern over the threat posed to democracy around the world. He stressed the need to protect democratic principles and institutions in India and America as well as around the world.


Before welcoming Prime Minister Modi to the White House on Friday, Biden tweeted, "This morning I am hosting Prime Minister Narendra Modi at the White House for a bilateral meeting. I look forward to working to strengthen the deeper ties between the two countries, maintain a free and open Indo-Pacific region, and tackle everything from the coronavirus pandemic to climate change.


Earlier on Thursday, in a meeting with Kamala Harris, the two leaders decided to further strengthen the India-US strategic partnership and discussed issues of common interest, including Afghanistan and the Indo-Pacific. In a joint press conference after the meeting, Prime Minister Modi said, "India and the US are natural partners. Our values ​​and geopolitical interests are the same.' Describing India and the US as the largest and oldest democracies, Modi said the two countries share common values ​​and that coordination and cooperation between them are gradually increasing. The two leaders appreciated that bilateral relations are in good times.


The Prime Minister told Harris, 'You are a source of inspiration to many people around the world. I am confident that under President Biden and your leadership, our bilateral relationship will reach new heights. Later, in a tweet, the Prime Minister said, "We spoke on a range of topics that will further strengthen the India-US friendship, which is based on shared values ​​and cultural ties." Both the leaders were wearing masks during the talks with the reporters. During the meeting, the Prime Minister invited Harris and her husband, Douglas Emhoff, to visit India. Modi said, "President Biden and you took office at a time when our planet was facing very difficult challenges. In a very short period, you have achieved many achievements be it corona pandemic or climate change or quad.

The Indian Ministry of External Affairs issued a statement saying that the two leaders exchanged views on recent global developments, including in Afghanistan, and reiterated their commitment to a free, open, and inclusive Indo-Pacific region. They also discussed the situation of the corona epidemic in their respective countries, including prevention of the epidemic through rapid vaccination and ensuring the supply of vital medicines and health equipment. Both sides recognized the importance of united action on climate change. The Prime Minister mentioned India's promotion of renewable energy and the recently launched National Hydrogen Mission. He also emphasized lifestyle changes to promote environmental sustainability. The Prime Minister said that America supported like a true friend during the second wave of Corona in India.

At the same time, while talking about democracy, Harris said, 'I know about the commitment of the Indian people to democracy through my personal experience and my family. We need to do that so that we can think about and realize our vision for democratic principles and institutions. Let us inform you that 56-year-old Harris' mother Shyamala Gopalan was a cancer researcher and civil rights activist from Chennai. Asked about Harris' remarks on democracy, Foreign Secretary Harsh Vardhan Shringla said the Vice President appreciated the fact that the two countries represent large and successful democracies. At the same time, we need to continue the work of promoting democracy not only in our own countries but also in other countries. "During the conversation, I think he mentioned that the US Parliament appreciated the fact that India and the US represent the two largest democracies," he said. There was a great appreciation for how both our democracies work. And I would say it was discussed in the actual meeting. At the same time, Harris said that the world today is more interconnected and more interdependent than before. The challenges we are facing confirm this fact. The Corona pandemic, the climate crisis, and our shared faith in the Indo-Pacific are examples of this.