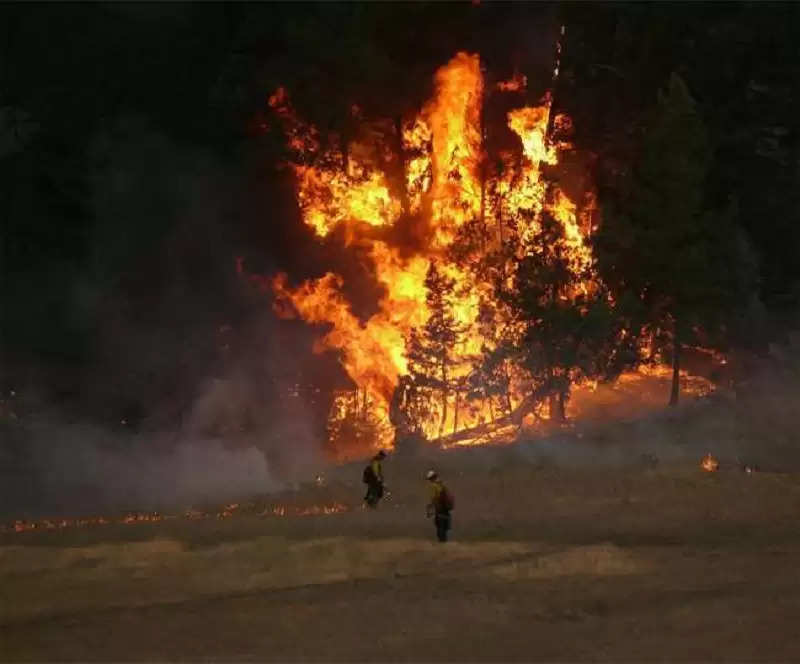 All efforts to control the forest fires in New Mexico have so far proved to be unsuccessful. The black smoke accumulated in the sky is working to increase the problems of the people. At the same time, the strong wind has also increased the problem.

People's lives have become difficult due to the fire in the forest of New Mexico, America. Due to the fire, where a layer of toxic smoke has accumulated in the sky, people are also facing difficulty in breathing. At the same time, the temperature is also increasing due to the fire. Due to the strong wind, it is becoming a problem for the firefighters to control the fire. Firefighters are also trying to extinguish the forest fire by pouring water on it with helicopters to control the fire. But, the strong wind has put a halt to his efforts for the time being. The entire army of firefighters is visible day and night in this city.

Firefighters tried their best to douse the fire on Saturday too, but the forest fire continues to take a formidable form. At present, efforts to normalize the situation are proving unsuccessful. Meanwhile, shops and restaurants have reopened in some places in New Mexico. However, people are also worried about what will happen next. Liz, who lives here, told the AP it was literally like living under a dark cloud. He also told that his daughter is suffering from headaches due to this suffocating smoke. This scene is very disturbing.

Let us tell that to extinguish this fire, about one and a half thousand firefighters and volunteers are giving their services. Apart from this, many helicopters and planes have been deployed to pour water from the air. It's been almost a month since this fire started blazing. More than 269 square miles (696 sq km) of forest have been reduced to ashes by this fire. This is an area equal to New York City.

Meanwhile, the Governor of New Mexico, Michelle Lujan Grisham, says that high temperatures and strong winds played a big role in increasing the fire. These have also become the biggest reasons for forest fires. So far 170 houses have been gutted due to the fire. More than 16 thousand people have been evacuated from this area. Scientists say that the temperature is likely to increase with strong winds in the coming days in this area. This can add to the trouble for firefighters and survivors here. This fire has not only created trouble for the people here, but it has also become a problem for other nearby cities.