Posters and banners of leaders started moving away in UP as soon as the Election Commission became strict! 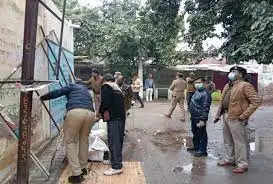 Model code of conduct is in force after the date of election is announced in Uttar Pradesh, administrative machinery has also been activated to follow it in all the districts of the state. Slogans have also started to fade away.

The Election Commission has banned the rally, roadshow, padyatra and cycle rally till January 15. That with the announcement of Assembly General Election 2022 on Saturday, the model code of conduct has come into force with immediate effect.

He has been warned that any deficiency will be taken very seriously and action related to it will also be stern.