Kurukshetra: The public's litmus test more than the election parties of five states 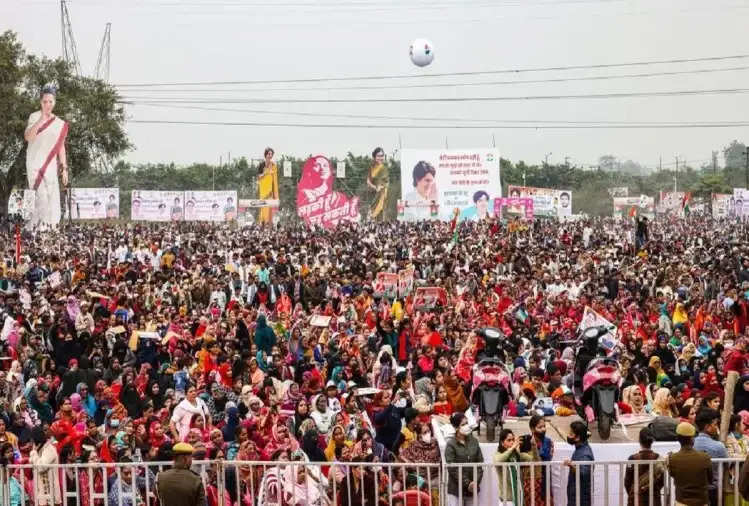 Each party has its own challenge
Of the five states where assembly elections are being held, four are in Uttar Pradesh, Uttarakhand, Goa, and Manipur with BJP governments, while the Congress is in power in Punjab. That is, the challenge of BJP to save its four states and also to bloom lotus on its own in Punjab, where it is going for the first time without the crutches of Akali Dal. At the same time, the goal of Congress is to save its government in Punjab and form the government in Uttarakhand, Manipur, Goa and perform a miracle in Uttar Pradesh under the leadership of Priyanka Gandhi. On the other hand, in Uttar Pradesh, the Samajwadi Party is in the fray with the intention of stopping the BJP alliance with its allies and forming its government, while the BSP is trying to bring at least so many MLAs that no government can be formed without it. The Aam Aadmi Party is trying its best not to miss the government formation this time in Punjab and is also in the fray in Uttarakhand, Goa, and Uttar Pradesh.

As always, PM Modi will be the commander
In these assembly elections, Prime Minister Narendra Modi will again be the general of the BJP, whose popular image the party will try to capitalize on in every election state. With Modi as his warlord, Chief Minister Yogi Adityanath, Union Home Minister Amit Shah, BJP President JP Nadda, Defense Minister Rajnath Singh, Union Minister Nitin Gadkari and all the big leaders of BJP have started campaigning in Uttar Pradesh. On the other hand, in the Congress in Punjab, where Chief Minister Charanjit Singh Channi, State Congress President Navjot Singh Sidhu, former State President Sunil Jakhar, etc. are leaders, while in Uttarakhand, former Chief Minister Harish Rawat is the savior of the party. In Punjab, Uttarakhand, Uttar Pradesh, and Goa, the Aam Aadmi Party have maximum confidence in the face of Delhi Chief Minister Arvind Kejriwal. Former Chief Minister Akhilesh Yadav, president of the Samajwadi Party, is single-handedly giving a strong fight to Modi Yogi's army. Whereas BSP chief Mayawati trusts the loyalty of her mass base more than a campaign. However, party general secretary Satish Mishra, like in 2007, has done meetings in almost the entire state to connect the Brahmins.

Responsibility of political parties amid Corona's transition
Like Bihar and West Bengal, these assembly elections are also being held under the shadow of the corona epidemic. The elections of Bihar were held during the phase of the first wave of Corona, while the elections of West Bengal, Assam, and Tamil Nadu were held in the peak phase of the second wave of Corona when people across the country were worried about the deaths and treatment due to corona infection. were battling. Now the elections in five states have started in the initial phase of the third wave of Corona, when there is an apprehension that if necessary steps are not taken, then the third wave can also be frightening. That is why this time, taking lessons from the beginning, the Election Commission has given a message and instructions to the political parties and people to strictly follow the Corona restrictions. On its part, the Election Commission has made all arrangements to conduct elections, avoiding corona infection, and has asked to do maximum election campaign through digital and media. Till January 15, all types of rallies, processions, processions, and any political program involving gathering have been completely banned. The further decision will be taken after reviewing the situation after January 15. The commission has completely banned the victory processions after the victory and has also given the facility to make nominations without crowd or online. All anti-corona measures including an increase in the number of polling booths have also been taken. Now it is the responsibility of the political parties to not only strictly follow the guidelines and restrictions of the Election Commission themselves but also to get them done by their supporters. Even more, it is the great responsibility of the general public to follow the Corona restrictions themselves and put pressure on the political parties to follow them and not allow crowds during the election campaign.

BJP's cut on opposition issues
Now if we talk about the issues in these elections, then the most important issues for the opposition are inflation, unemployment, prices of diesel petrol, price and shortage of fertilizers, increased price of gas cylinders, increased electricity rates, decaying economy, small shopkeepers, traders and There is sluggishness in the business of entrepreneurs, the problem of stray and stray cattle, crimes against women, oppression of downtrodden and marginalized sections. Along with this, during the first wave of Corona, the sufferings of migrant laborers who reached their villages by walking thousands of miles and in the second wave a large number of deaths due to illness and lack of treatment, bodies flowing in the Ganges and other rivers and buried on the banks. The dreadful memories of long lines at crematoriums and graveyards will also be raised by the opposition in the election campaign.

To cut these, the ruling Bharatiya Janata Party in four states announced projects worth thousands of crores by Prime Minister Narendra Modi; By making the Purvanchal Expressway an issue, it is trying to blunt the edge of negativity and anti-incumbency trends arising out of the opposition's allegations with its developmental announcements. Along with this, BJP is trying to warn the public in Uttar Pradesh by declaring the rule of the Samajwadi Party as the secret of criminals that if SP wins, then the rule of that mafia will return, which the Yogi government has either sent to jail or else. Killed in police encounters. All BJP leaders including Prime Minister Modi, Home Minister Amit Shah, Chief Minister Adityanath, party president JP Nadda are raising this issue vigorously in their meetings. When he says mafia, he usually refers to the likes of Atiq Ahmed and Mukhtar Ansari, which serve two targets, one that raises the slogan of the BJP against criminalization and at the same time helps in anti-Muslim polarization. While many criminals and people with mafia characters are also seen in the corridors of power and on the platform of BJP leaders. The opposition is also making an issue of it in its own way, most notably the father of the Lakhimpur Kheri case accused Ashish Mishra and the central home state. Minister Rakesh Mishra Teni is being taken, whose resignation has been continuously demanded by farmers' organizations and opposition parties.

Challenge of the social equation in front of BJP
In these elections, the biggest challenge before the BJP in Uttar Pradesh is to keep its social equation simple, due to which it has got a massive victory in 2014, 2017, and 2019 elections in Uttar Pradesh. In these elections, where the upper caste Hindus were complete with it, the BJP got huge support of non-Yadav backward and non-Jatav Dalits and in a way, the Hindutva concept of the RSS overshadowed the caste mobilization. But this time the situation has changed. In spite of contesting elections by making Keshav Prasad Maurya the state president, the sudden appointment of Yogi Adityanath as the chief minister, the BJP's mockery on the issue of caste census, and the supremacy of the upper castes in the governing administration has angered the backward. While the farmers' agitation angered the Jats and other peasant castes, who had been a strong ally for the BJP in the last three elections in western Uttar Pradesh, it is difficult to say how far their displeasure has gone despite the withdrawal of all three agricultural laws. On the other hand, incidents like Sonbhadra, Hathras, killings of Dalits in Agra Ballia Prayagraj, and police arbitrariness in the name of encounter, killing of young businessmen in Gorakhpur have affected the image of the government. While Priyanka Gandhi herself created trouble for the government on every such incident on behalf of Congress, Akhilesh Yadav of SP is now raising them in every meeting.

Akhilesh's backward revolution in front of BJP's Hindutva
Akhilesh Yadav, sensing this social dissatisfaction, has named his election campaign as Backward's Inquilab and he used Om Prakash Rajbhar's SP, Sanjay Chauhan's party, Keshavdev Maurya's party to mobilize with non-Yadav backward SP as before. Mahan Dal, Jayant Chaudhary's Rashtriya Lok Dal, Krishna Patel, wife of Apna Dal founder Sonelal Patel, Pal Samaj leader Rajaram Pal joined SP from Congress, Jats leaders Harendra Malik and Pankaj Malik, Sukhdev Rajbhar's son Ram Achal Rajbhar, Lalji Along with Verma, leaders of many backward and peasant castes have tried to expand the support base of SP. There is also talk of an alliance with the SP of the Aam Aadmi Party. Akhilesh Yadav's eyes are also on Sanjay Nishad, leader of the Nishad Party, who went with the BJP and some ministers of the Yogi government. Akhilesh's attempt is to reverse the elections by forming a backward alliance of Mandal's era in the cut of Hindutva of BJP. Apart from this, the Brahmin community, which constitutes about 12 percent in the state, which is the most vocal voter group in this election, is in competition among all the parties to take it with them. The BJP considers it to be its traditional support base and after the weakening of the Congress, the BJP has been the natural choice and party of the Brahmins. But in 2007, the BSP's slogans 'Pandit Shankh Bajga Haathi Badhte Jayega' and 'Hathi Nahi Ganesh Hai Brahma Vishnu Mahesh Hai' led a large number of Brahmins to join the BSP and it formed an absolute majority government. Later the Brahmins joined the SP and then the BJP in 2012. This time due to various reasons, there has been a perception in the state that Brahmins are neglected and that is why while Samajwadi Party is trying to connect Brahmins by inaugurating the Parashuram temple, BSP has tried this through enlightened conferences by forwarding Satish Mishra. At the same time, BSP is also raising the issue of Khushi Dubey, who is in jail in the Vikas Dubey case, and Satish Mishra himself is fighting a legal battle for it.