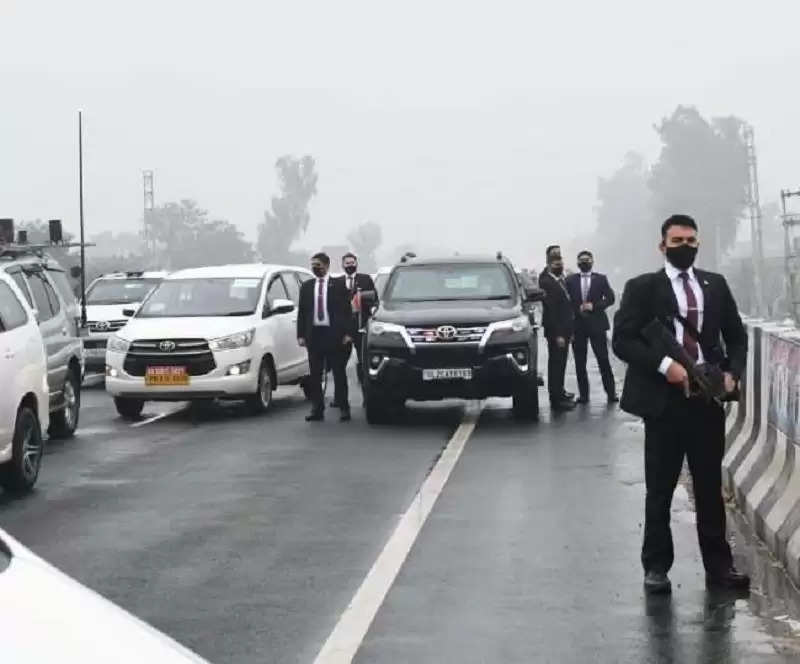 When the Prime Minister's convoy reached a flyover about 30 km from the National Martyrs Memorial in Hussainiwala, some protesters blocked the road. It is said that Prime Minister Modi remained stuck on the flyover for 15-20 minutes.

Prime Minister Narendra Modi was scheduled to hold a rally in Ferozepur on Wednesday but the rally has been canceled due to security reasons. When the Prime Minister's convoy reached a flyover about 30 km from the National Martyrs Memorial in Hussainiwala, some protesters blocked the road. According to the report of news agency ANI, the convoy of Prime Minister Narendra Modi was stuck on the flyover for 15-20 minutes near Hussainiwala in Ferozepur district.

Terming it a big lapse in the security of PM Modi, the Home Ministry has called for a reply from the Punjab Police. The Home Ministry in its statement said that after a "major security lapse" in the Prime Minister's visit to Punjab, his convoy decided to return. We have asked the Punjab government to fix the responsibility of this lapse and take strict action.

According to news agency ANI, PM Modi had reached Bathinda on Wednesday morning from where he was to go to the National Martyrs Memorial at Hussainiwala by helicopter, but due to rain and poor visibility, the Prime Minister waited for about 20 minutes for the weather to clear. With no improvement in the weather conditions, the convoy decided to proceed to the memorial by road. According to the report, PM Modi's convoy had proceeded by road after DGP Punjab Police confirmed the necessary security arrangements, during which the incident took place.

The Union Home Ministry further said that some protesters blocked the road when PM Modi's convoy reached a flyover, about 30 km from the National Martyrs Memorial in Hussainiwala. The PM was stuck on the flyover for 15-20 minutes. This was a big mistake. The Punjab government was informed about the Prime Minister's schedule and visit long back. The Punjab government was asked to deploy additional security personnel who were not deployed to secure any movement by road.