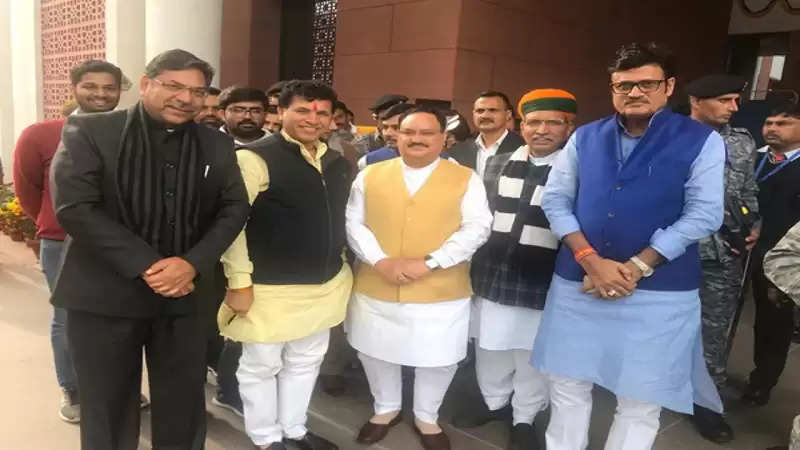 An important BJP meeting is going to be held in Delhi on Tuesday to take feedback related to the BJP’s mission 2023 and the organization of Rajasthan, in which the party’s national president JP Nadda will meet the prominent leaders of the Rajasthan BJP. State President Dr. Satish Poonia, Leader of Opposition Gulabchand Kataria, Deputy Leader Rajendra Rathod will be present at the meeting.

Assembly elections in Rajasthan to be held at the end of 2023 (Rajasthan assembly election 2023) for BJP Got into election mode. After the visit of BJP leaders to Delhi and the in-charges from the central leadership started the state tour, BJP is now gearing up for the elections. BJP’s Mission 2023 And BJP in Delhi on Tuesday to get feedback related to the organization of Rajasthan. (Rajasthan BJP meeting) An important meeting is going to take place. Party National President JP Nadda During this, there will be a meeting with the prominent leaders of Rajasthan BJP. It is believed that the meeting can start at JP Nadda’s house after around 10 am. According to media reports, BJP state president Dr. Satish Poonia attended the meeting. State Organization General Secretary Chandrashekhar, Leader of Opposition Gulabchand Kataria, Deputy Leader Rajendra Rathod Along with this, Union Ministers Gajendra Singh Shekhawat, Arjun Ram Meghwal, and Kailash Chaudhary coming from Rajasthan will be present.

In Rajasthan, elections are proposed at the end of next year, while on the other hand, there are reports of factionalism in the BJP state unit for a long time, so Nadda will try to formulate the party’s strategy from an organizational point of view. At the same time, Nadda will also take their feedback after the visit of prominent central leaders to Rajasthan.

Along with this, Amit Shah’s upcoming visit to Rajasthan and the party’s election strategy can be discussed in the meeting. According to the report, the main agenda of the meeting is to bring unity among the BJP. The high command wants to keep the Rajasthan BJP leaders united, for which a new strategy will be worked out.

Let us tell you that the discussion of increasing tension and factionalism among the leaders of Rajasthan BJP is common and many types of factions in the BJP are active in the state, which can harm BJP in elections.

The traffic of BJP leaders started in Rajasthan

It is worth noting that long before the elections, the visits of BJP leaders started in Rajasthan. It is believed that Amit Shah can visit tribal-dominated areas in May. At the same time, state BJP leader JP Nadda also wants to invite him to visit Rajasthan in the coming days. The state leadership wants Nadda to inaugurate the newly constructed party’s district office buildings in Rajasthan, so Nadda can also visit Ajmer in the coming days.