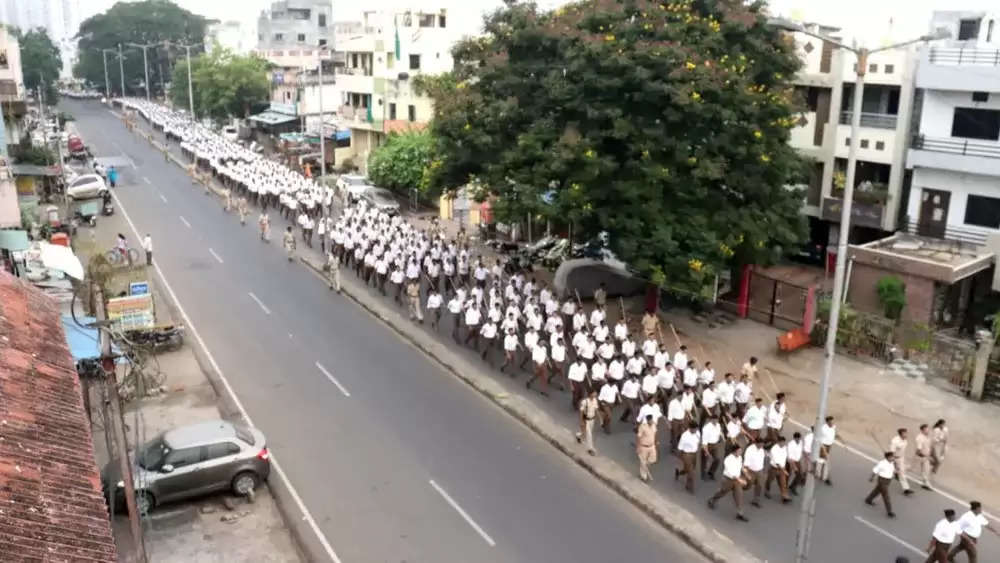 A 'Route March' was taken out by the Rashtriya Swayamsevak Sangh (RSS) in three cities including Cuddalore in Tamil Nadu on Sunday. Whereas Viduthalai Chiruthaigal Katchi (VCK) distributed copies of 'Manusmriti' among the people in protest against this move of the right-wing organization. RSS volunteers in full uniform (white shirt and khaki pants) took part in this march amid tight police security in Cuddalore, Kallakurichi, and Perambalur. A press release issued by the RSS said that the march was taken out to commemorate the 200th birth anniversary of Sant Vallalar (1823 to 1874), the 153rd birth anniversary of Mahatma Gandhi, and 75 years of independence.

Public meetings were organized after the march. At the same time, CK's founding president Thol Thirumavalavan distributed copies of Manusmriti here and said that the party has distributed one lakh copies of selected portions of 'Manusmriti' in Tamil Nadu. The party said the move was aimed at stopping the RSS and its ideology.

There was a plan to march in 50 places

In compliance with the order issued by the Madras High Court, the RSS cadres did not resort to lathis on Friday as they do during the Route March. On October 2, the organization had planned to take out route marches in more than 50 places. But the government refused to allow it citing law and order concerns. The government had also refused permission for a rally called on the same day by Viduthalai Chiruthaigal Katchi in response to the RSS's route march.

After this, the RSS approached the High Court. The High Court had ordered on this that permission should be given to organizing the march on 6 November. Along with allowing the march, the court also imposed several restrictions, the most important of which was that the march should be organized in a closed place such as a ground or stadium. The court had also categorically refused to allow the march at 6 places.

An RSS spokesperson said that in three places where the program was held on Sunday, permission was given to march on the streets. However, in other places, we were asked to take out marches on the closed premises. We did not agree with this. Our intention was to perform our work in a peaceful manner, as seen by all on Sunday. After demanding legal remedy, we will take out a march in other places.