Monkey terror in Kanpur Police Commissioner's office, cutouts of langurs installed to drive them away 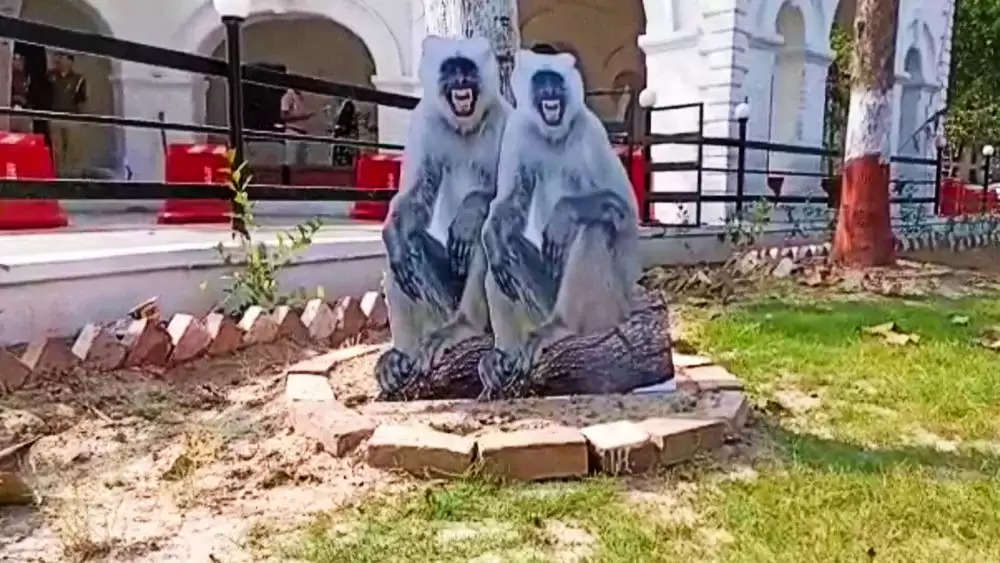 The sting of the Uttar Pradesh Police is resonating among the criminals of the whole country. But, the condition of the Kanpur Police Commissioner's Office is such that the policemen themselves have become so troubled by the terror of these monkeys. However, now they have to resort to posters and cutouts of langur monkeys. In fact, monkeys have spread terror in the Kanpur Police Commissioner's office for years. They tear the files kept in the police office and sometimes they tear the covers of the files. They snatch even the bags of the complainants and police personnel who come here.

Not only this, but they also cause heavy damage to the vehicles parked on the campus. By the way, on seeing the police, the air of big criminals becomes tight. But the policemen posted in the police office have been kept in the nose.

These mischievous monkeys, the policemen made many efforts to drive these monkeys away. However, in this police office located near the Kachari area of ​​Kanpur, senior police officers including the chief police commissioner of the district sit.

At the same time, even before this, due to the terror of these monkeys, the police captains informed the forest department and the cattle catcher team of the municipal corporation several times and informed them. Where the Forest Department team came many times to catch the monkeys, but they dodged them and left. Municipal Corporation was also informed but the monkeys could not be controlled. After all, after getting tired, now the police has found a way to remove the thorn from the thorn.

In such a situation, the police have got posters and cutouts of langur monkeys installed all around in their office. In this complex, there is the office of the Police Commissioner, Joint CP, DCP West. Apart from this, there are offices of dozens of police departments here. In such a situation, these monkeys enter the office and tear the files of the policemen. Hundreds of vehicles are parked outside, their seat covers are torn. It is believed that red-faced monkeys are in danger from langur monkeys. They run away on seeing the langur monkey.

Posters of langur put up in the commissioner's office

However, now in such a situation, the officials of the Kanpur Police Commissioner have got posters of langur monkeys installed all around the police commissioner's office. Which are 3 feet-hoarding monkey cutouts hung in the trees. Now it has to be seen how much of their effect is seen.