Did Mahua Moitra hide her Louis Vuitton bag worth 1.5 lakhs during the rising inflation debate? Click here to know! 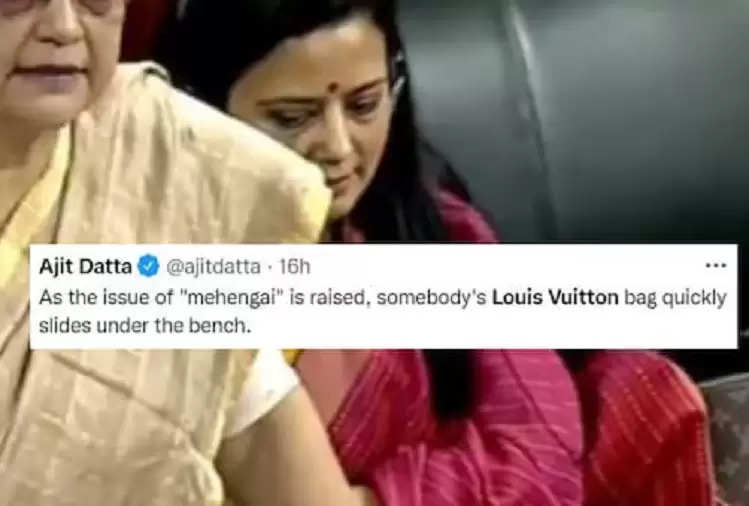 A video of TMC MP Mahua Moitra keeping her Louis Vuitton bag under a table amid the discussion on inflation in Lok Sabha is going viral on Twitter, with people claiming that the MP tried to "hide" the bag. Trinamool's Kakoli Ghosh was speaking on inflation when Moitra took her bag from the side and placed it under the table. According to IANS, it was a Louis Vuitton bag that cost around Rs 1.5 lakh.

Moitra was criticized by Twitter users for using expensive bags.

The issue of inflation on which the opposition has been questioning the government since the beginning of the monsoon session of Parliament. There was continuous disruption, after which the government agreed to discuss the issue of a price hike in the Lok Sabha on Monday and in the Rajya Sabha on Tuesday.

The clip of her keeping the bag under the table went viral on social media, where several netizens exposed the "hypocrisy" of the TMC leader.

A netizen named Monica Verma slammed Mahua Moitra and said, "It's okay to own a Louis Vuitton, but as soon as the debate on inflation starts, it's huge hypocrisy to hide it under the table."

If Hypocrisy had a Face🥴

Meanwhile, actress Swara Bhaskar stepped in to defend Moitra. Bhaskar tweeted, 'Don't think Mahua Moitra tried to hide her branded bag. She had a prosperous corporate career and bought branded items with her hard-earned money. How controversial is all this."

Moitra had recently courted controversy after her remarks on Goddess Kali. She created a political storm by calling Kali a "meat-eater, a wine-accepting goddess". Moitra, however, refused to budge from her stand and called the controversy a "false sentiment of the BJP and its trolls".