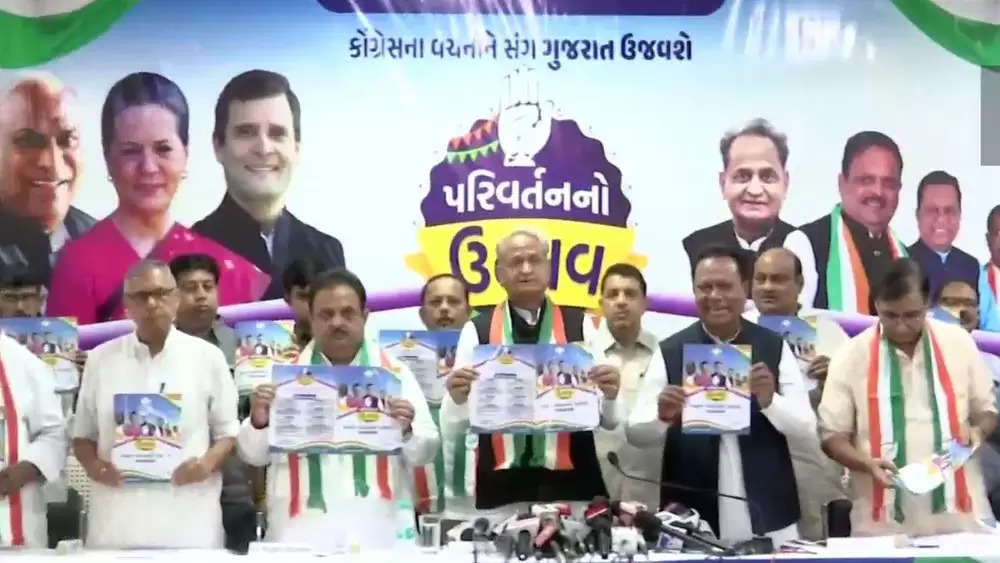 Now Congress has also released its election manifesto for the Gujarat elections. Congress has claimed that if the government is formed, the price of an LPG cylinder will be five hundred rupees. At the same time, people will get free electricity for up to 300 units.

Rajasthan Chief Minister Ashok Gehlot, while releasing the election manifesto of Gujarat, said that in this the promises of Rahul Gandhi have been kept at the center. This includes issues like loan waiver for farmers, old pension system, end of contractual practice etc. In this election announcement released in the name of 'Jan Manifesto 2022', it has been said that this time there will be a government of the people in Gujarat.

The Congress party has mainly made inflation and unemployment an issue in its election manifesto. Along with this, priority has been given to education, health, farmers, agriculture, land law. Similarly, the issues of all other sections including government-semi-government employees have been included. Releasing the election manifesto, senior party observer in Gujarat and Rajasthan Chief Minister Ashok Gehlot said that for 27 years, Gujarat wants to recover from misgovernance and fake development promises. He hoped that this time the Congress government would be formed in the state. After this, all those problems of the people, which have arisen during the BJP rule, will be gradually eradicated.

Congress has tried to woo the farmers through its manifesto. In this, along with waiving the loan of farmers up to Rs 3 lakh, electricity bill waiver has been claimed. In this sequence, common consumers have also been asked to waive electricity bills up to 300 units.

Congress has promised one million government jobs in Gujarat in its manifesto. Trying to woo the youth with this promise, the Congress has claimed that there will be 50 percent reservation for women. With this promise, the Congress also tried to attract women voters of the state. It has been said in the manifesto that after the formation of the Congress government in Gujarat, the practice of contracting in government jobs will be abolished. At the same time, unemployed youth will get an unemployment allowance of Rs 3000 per day of Rs 100.

To the people of Gujarat troubled by the rising inflation, the Congress has promised a LPG cylinder for five hundred rupees. During the Corona period, the central government had abolished the subsidy from LPG, but the Congress has claimed that after the formation of the government, a subsidy of five hundred rupees per cylinder will be given to the LPG consumers. With this, a promise has been made to open 3000 English medium government schools in Gujarat. Along with this, there is a promise to provide free education to girls from KG to PG.