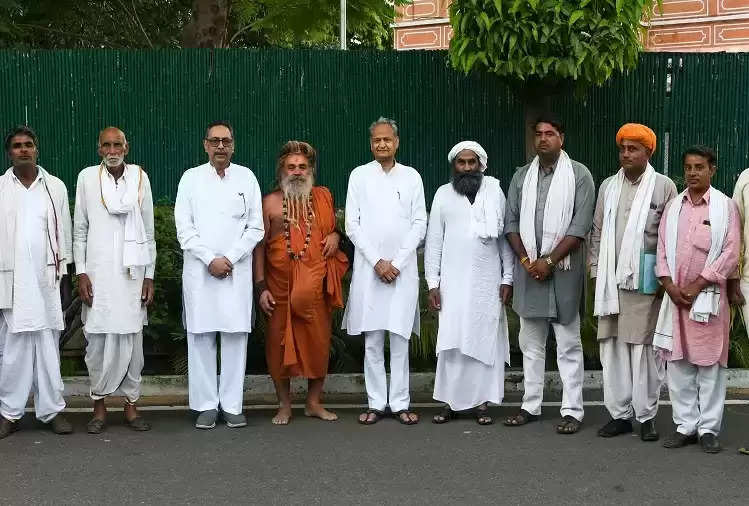 Keeping in view the demand of the sadhus, the government had already given in-principle consent to ban all kinds of mining going on in the area of ​​religious importance.

Despite this, the demise of the late Mahant Shri Vijaydas Ji is extremely sad.

Chief Minister Ashok Gehlot on Sunday met the delegation of sadhus, mahants, public representatives, and villagers from Pasopa and nearby villages of Bharatpur at the CM's residence and expressed condolences on the death of Mahant Shri Vijaydas and assured to fulfill all his demands. This has been said.

Gehlot said that by taking a quick decision, instructions have been given by the state government to stop all legal mining activities in the said area. Also, this land has been transferred to the Forest Department. In the past also, on the demand of saints, the legal mines running in the area were closed by the government and at present work is being done to close 46 legal mines and shift them elsewhere.

The saints and saints accepted in the conversation that this is a complicated process and they demanded it to be completed in two months, on which the government has assured positive action in this time frame. Gehlot said that it takes time to convince the villagers of the area whose livelihood was dependent on mines, but still the work has progressed rapidly.

The Chief Minister said that among the demands given by the local people to the district administration, the construction of a road from Deeg Sikri road to Pashupati Nath temple, the construction of a gate in the name of late Mahant Shri Vijaydas Ji, and the installation of high mast light on the hill of Pashupati Nath temple were accepted. has been done.

At the same time, fast work is being done on the grand construction of the Pashupati Nath temple and the approval of the powerhouse.