Zaira Wasim shares her photo for the first time after keeping her distance from Bollywood, seen in a burqa Zaira Wasim had not posted any of her photos on Instagram since her announcement of leaving the film industry. This photo of the former actress has become a topic of discussion, in which she is seen wearing a burqa.

New Delhi: Zaira Wasim, who became famous with 'Dangal' and 'Secret Superstar', has posted a picture of herself on her Instagram account. The former actress has shared this latest photo after her big announcement when she said that she is leaving her acting career, as it does not match with her religious beliefs and beliefs. After this announcement, she deleted all her pictures from her social media account.

In the latest picture, she is seen walking on a bridge. Zaira is wearing a burqa and turns her back to the camera. His face is not visible in the photo. He captioned the picture, 'The scorching sun of October.' The former actress has shared this photo of herself about 4 hours ago, on which close to one lakh likes have come. 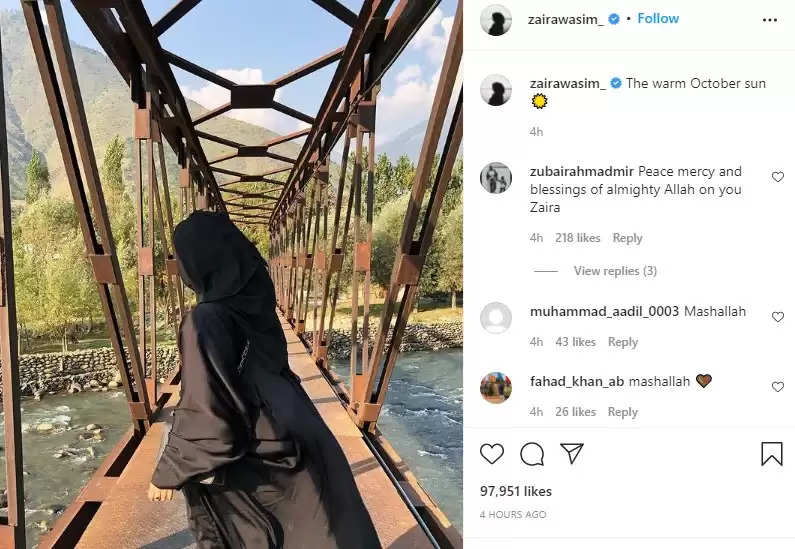 Zaira Wasim had announced to leave their acting career in 2019. (Photo Credits: Instagram/zairawasim_)

According to media reports, Zaira had requested fans to remove her pictures from social media in November 2020, as she was trying to start a new phase in her life. Zaira won the National Award for her acting. He wrote a lengthy post on his Facebook page in 2019, which he later shared on all social media platforms.

Zaira had said in the long post, 'Five years ago, I took a decision, which changed my life forever. As soon as I stepped into Bollywood, the doors of popularity opened for me. I came into the public eye, I was projected as a symbol of success and shown as a role model for the youth. However, I never thought of doing or becoming anything like that, especially with regard to my own ideas of success and failure, which I had only begun to explore and understand.' Zaira had further said that when she has completed five years in this profession, she wants to admit that she is not really happy with her identity i.e. her work.