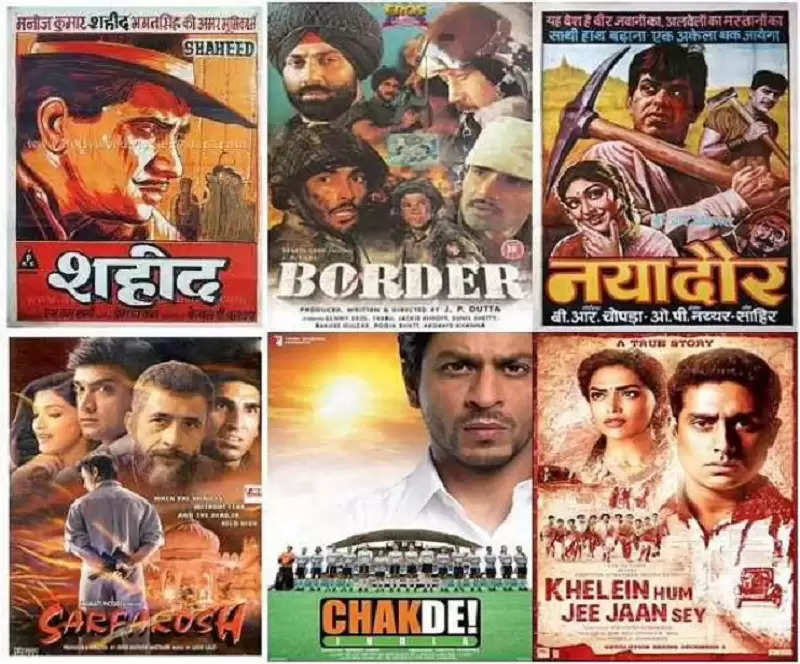 On the other hand, when the 'India Raksha Parv', being run by Dainik Jagran for almost two decades, the teeth of the enemies turn sour due to a shout of the Bravehearts of the Indian Army dedicated to the country's pride. Rakhis and greeting cards that came from every corner of the country reach those brave, these young men become emotional. Cinema has been saluting his similar feelings for a long time.


These movies are tales of martyrdom


When China suddenly attacked India in 1962, our soldiers had neither warm clothes nor special resources available to survive below zero temperature. Yet our soldiers fought the Chinese army. Released in the year 1964, Balraj Sahni and Dharmendra starrer 'Haqeeqat' was a film set against the backdrop of this war. Despite the presence of Chinese soldiers in numbers, the spirits of Indian soldiers do not falter. Similarly, the mention of 'Border', which introduces the indomitable courage of the Indian Army, also abounds. JP Produced by Dutta, 'Border' is based on the 1971 war between India and Pakistan. Dutta made this film in memory of the martyrs of this war as well as his brother Deepak. Deepak was part of the Indian Air Force. He had seen the battle of Longewala on the Jaisalmer border of Rajasthan with his own eyes and narrated the whole story to Datta. In 1987, Deepak was martyred in a MiG-21 crash. The character of Wing Commander Andy Bajwa (Jackie Shroff) in 'Border' is said to be inspired by his brother Deepak. Be it 'Border' or 'Haqeeqat' these were not mere films, they were the tales of the martyrdom of those heroes who did not care for their lives for the sake of the country. Along with the courage of the soldiers in war, the film also gives a glimpse of their personal life that the soldiers swinging between home and duty keep the motherland paramount. Many films like '1971', 'Raazi', 'Kesari' made around the war tell the valor of the country. While these films emotionally connect the countrymen, they also do wonders at the box office.

Untold stories that touch the heart

These stories of changing India not only communicate patriotism but also bring the untold glories of the country to the world. The untouched page of history was depicted alive in 'The Ghazi Attack'. The film 'Bhuj: The Pride of India', recently released on Disney Plus Hotstar, brought to the fore the bravery of the Air Force during the 1971 war. The airstrip damaged by the Pakistanis in Bhuj, Gujarat, was repaired overnight by 300 rural women led by Squadron Leader Vijay Karnik, who was then Air Force Base Commander. Stories dedicated to the heroes of the Kargil war are also coming to the fore. Similarly, on Amazon Prime Video, the film 'Sher Shah', made on the life of Captain Vikram Batra, who was martyred in the Kargil war, is also very much liked by the audience. Captain Vikram Batra's martyrdom and select moments from his personal life have made 'Sher Shah' the choice of the audience. Earlier, the film Dhoop, inspired by the biography of Captain Anuj Nayyar, who was martyred in the Kargil war, was directed by Ashwini Choudhary.

Son dedicated to the defense of the country

The name of 'Uri: The Surgical Strike' released in the year 2019 is also included in showing the emotional aspect with the valor of the Indian Army. To give a befitting reply to the cowardly attack on the Uri Army camp in Baramulla, Jammu, and Kashmir on September 18, 2016, the Indian Army conducted a surgical strike in Ghulam Kashmir. The film was based on the same incident.

There are still many stories left

In June last year, in the Galvan Valley of Ladakh located at an altitude of 19,000 feet, Indian soldiers gave a stern message to China by countering Chinese soldiers. Ajay Devgan has announced to make a film on this incident. The biopic of Major Sandeep Unnikrishnan, who was martyred in the 26/11 Mumbai attack, is also going to be released. It stars South's actor Adivi Shesha in the role of Sandeep. In the coming days, the film 'Pippa' will tell the story of the courage of Brigadier Balram Singh Mehta of the 45th Cavalry Tank Squadron, who fought together with his brother and sister on the Eastern Front. Meghna Gulzar is set to make a film on former Army Chief Sam Manekshaw, while Varun Dhawan will be seen in the biopic of Arun Khetrapal, who died in the 1971 war. These films depict the era when the Indian army was not equipped with state-of-the-art weapons, limited resources of communication, but the soldiers were courageous in the defense of Mother India.