Kangana Ranaut has said this while pointing to the arrest of Aryan Khan, son of Bollywood actor Shahrukh Khan.

Kangana Ranaut has shared a post on social media. In this, she has told how Hollywood actor Jackie Chan publicly apologized in 2014 after his son was arrested for drug-taking. Things have been shared on Instagram. Kangana Ranaut has written in her post how in 2014, Jackie Chan's son Jessie publicly apologized after being named in the drugs scandal.

Jacqui was arrested by the police from a Beijing apartment with 100 grams of marijuana. After this, Jackie wrote on the Chinese-language social media site, 'As a public figure I am ashamed and sad. Her mother's heart is broken. I publicly apologize to the people with Jacsi.' Kangana Ranaut shared the picture and wrote, 'I am just saying.' 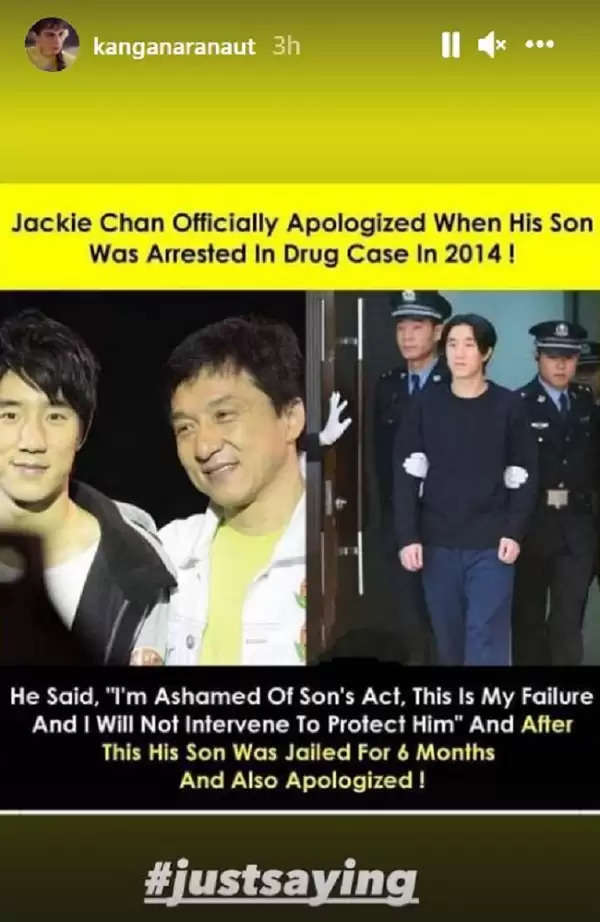 Kangana Ranaut has said this while pointing to the arrest of Aryan Khan, son of Bollywood actor Shahrukh Khan. , 'Aryan's mistakes will help him to become wiser. It does not mean that he should not be punished for his mistakes.' Lessons should be learned. I think that now they will get a new direction and now they will also experience the punishment of this action. When someone has done wrong, he should be called wrong and not defended.

Maharashtra | Narcotics Control Bureau(NCB) arrested 2nd foreign national from Goregaon, in connection with Drugs-on-cruise case & seized an intermediate quantity of drugs from him. He'll be produced in the court. He's key person of our investigation in the case, says the agency

At the same time, many people have spoken in favor of Shahrukh Khan's son. This includes Hrithik Roshan. He also wrote an open letter in favor of Aryan Khan. While actors like Raveena Tandon and Sussanne Khan have also come in support of Aryan Khan.