Aryan Khan Bail Hearing In the drugs case, the troubles of Shah Rukh Khan's son Aryan are not taking the name of lessening. NCB had arrested 11 people including Aryan in the drugs case. These include the names of his friends Arbaaz Merchant and Munmun Dhamecha.

In the drugs case, 8 accused including Shah Rukh Khan's son Aryan Khan have been sent to judicial custody. Recently, the Narcotics Control Bureau (NCB) arrested 11 people, including Aryan, in the drugs case. These include the names of his friends Arbaaz Merchant and Munmun Dhamecha. All of them were arrested from a cruise ship named 'Cordelia the Impress' going from Mumbai to Goa.

Today (Thursday) the cruise ship case is being heard in court. In such a situation, the NCB demanded the court to take Aryan Khan, Arbaaz Merchant, Munmun Dhamecha, and five others on remand till October 11 in the cruise ship case. While seeking custody of Aryan Khan and 7 others in the drugs case till October 11, the NCB told a Mumbai court that it is still conducting raids and no one was arrested in those raids, news agency ANI reported. The person would need to come face to face with the present accused.

Party on cruise ship case: Aryan Khan and 7 others produced before Mumbai court for further remand.

In its application, NCB has sought their custody till Oct 11

At present, Aryan is in the custody of the Narcotics Control Bureau (NCB) for five days. The last hearing was held on October 4, in which Aryan's NCB custody was extended by three days till October 7. NCB has so far arrested more than 10 people in this case. On the night of 2 October, the NCB team raided a luxury cruise going from Mumbai to Goa based on a tip.

While seeking custody of Aryan Khan & 7 others till Oct 11 in the drug seizure case, NCB tells a Mumbai-based court it is still conducting raids and "anyone arrested in those raids would be needed to be confronted with the present accused"

According to NCB, drugs and banned drugs were being consumed in the rave party going on on the cruise. Eight people were taken into custody in this raid, including Shah Rukh's son Aryan. After several hours of interrogation, on October 3, the NCB arrested all eight people including Aryan, Munmun Dhamecha, Arbaaz Merchant, Vikrant Chhokar, Nupur Sarika, Ismeet Singh, Mohak Jaiswal, and Gomit Chopra. All the accused have been arrested under sections of the NDPS Act. After a medical examination, he was produced in court on the same day, from where he was sent to one-day NCB custody. 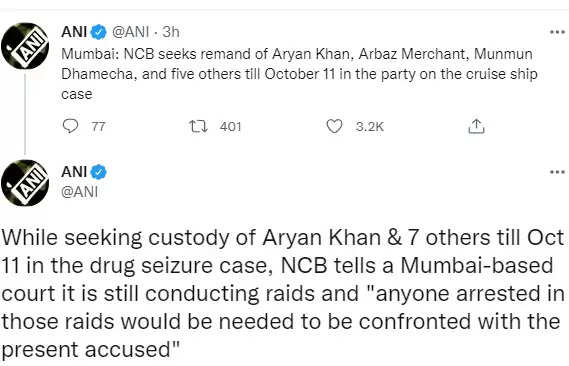 At the end of one day, on October 4, the NCB produced everyone again in the court. Aryan's case is being fought by well-known lawyer Satish Manshinde. NCB requested for extension of custody for further investigation. After hearing both sides, the court extended the custody of Aryan, Munmun Dhamecha, and Arbaaz Merchant by 3 days till October 7. Along with them, the remaining five people were also sent to custody till 7 October. As per reports, no drugs were recovered from Aryan. Some suspicious chats have been found in his mobile phone, for which Aryan's mobile has been sent for forensic examination.