Video: Urfi Javed gave a semi-nude pose, and covered herself with a long braid, netizens made these comments! 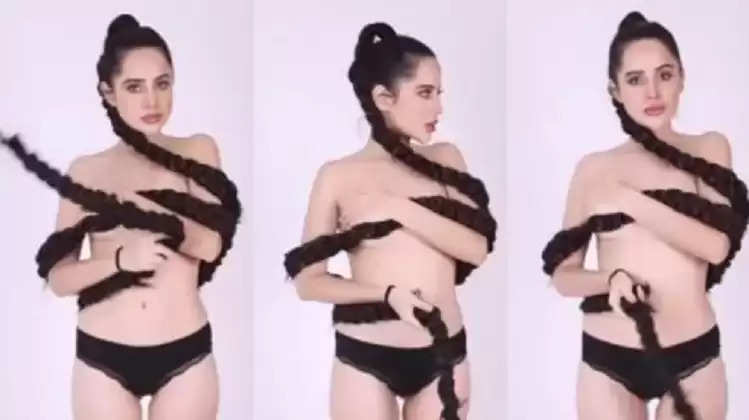 Urfi Javed's Social media users have a field day whenever she posts something. Her reel grabs attention instantly, as it never disappoints. Uorfi's 'unique' experiments with looks and outlandish outfits manage to keep him in discussions.

Recently Urfi decided to give a twist to Rapunzel. The Splitsvilla 14 contestant posted a reel, where she is posing topless, covering her body with a long black ponytail. In the video, Urfi is flaunting her long hair and captioned it as, "I like what I see."

Urfi's post attracted people and they started trolling her brutally.

One user wrote, 'Say whatever, but she slays every time.' Another user wrote, "Yaar yeh kuch bhi pahana leeti hai but manana padega iska confidence never seen loose." One of the users said, "To cut her hair, I am ready to quit my government job and even become a barber."

Urfi Javed's dispute with Bharatiya Janata Party leader Chitra Wagh continues. Later after filing a police complaint against Urfi, the model targeted the politician in her tweets and other social media posts. In his latest attack, Urfi targeted Wagh for allegedly "threatening to kill her in public".

Urfi later thanked Chakankar and the commission in a tweet. “Can't thank @ChakankarSpeaks & @Maha_MahilaAyog enough for standing up for what is right. Even if you don't like my clothes, you cannot take the law into your hands and publicly threaten to kill me or incite violence.