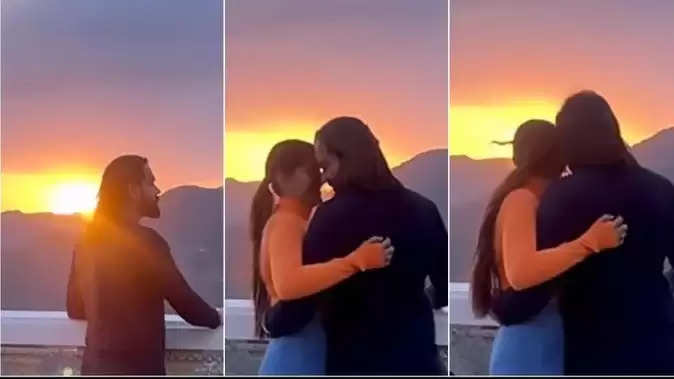 Haryanvi Queen Sapna Choudhary, known for her excellent songs and scintillating dance moves, often remains in discussions on social media. Bigg Boss fame Sapna Choudhary remains in the headlines for her pictures and videos on social media. Fans of the actress, who competes with the big actors in terms of fan following, not only like her posts but also eagerly wait for her pictures and videos.

In this sequence, the actress has recently shared a new video of herself on her official Instagram account. In this video that surfaced, Sapna is seen romancing her husband Veer Sahu. In this shared video, Sapna's husband Veer is seen standing alone on the terrace. After some time, Sapna Chaudhary enters the video and is seen romancing her husband. The fans of the actress are very fond of this video of Sapna-Veer romancing in the setting sun between the mountains. Sharing this video on Instagram, the actress wrote in the caption, 'Heart beats'. On this recently shared video, Sapna's fans are lavishing junker love. Along with this, fans are also commenting continuously on this video. Commenting on one user wrote, perfect pair. Another fan wrote, Made for it other. On the other hand, another user commented, Best couple. Along with this, fans are praising this video and their pairing of Sapna and her husband by making constant comments.

This is not the first time that Sapna has expressed her love for her husband in front of everyone like this. The actress had earlier got her husband's name written on her hand. Apart from this, the actress remains connected with the fans through social media. Earlier, the actress also shared a dance video of hers with fans on Eid. In this video, Sapna was seen dancing in a blue outfit, which was fiercely liked by the fans.