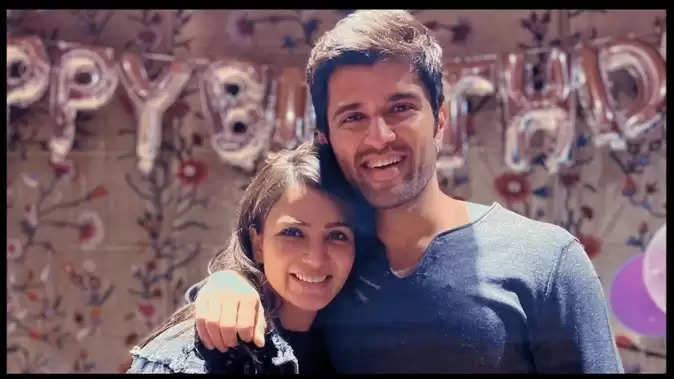 South Superstar Vijay Deverakonda is celebrating his 33rd birthday today i.e. on 9th May. His co-star and South actress Samantha Ruth Prabhu has wished the actor, who rose to fame with the audience with the 2017 film 'Arjun Reddy', on his birthday. Samantha made the actor's day even more special by sharing a cute picture of herself and Vijay on social media.

Samantha shared a post
On this special day, Vijay Deverakonda's co-star and friend Samantha shared an adorable picture of the actor on her official Instagram handle and also penned a lovely note to wish him a happy birthday. She writes, "Happy birthday Liger Vijay. You will be worthy of love and appreciation in this year to come. It is so inspiring to see you work like this. God bless."

Birthday celebrated in Kashmir
In the picture shared by Samantha, Samantha and Vijay can be seen smiling. This picture of him was taken on the sets of his upcoming film 'VD-11' in Kashmir. Let us tell you that both the actors are working together in 'VD-11'. Vijay celebrated his birthday with the entire team of the film and also cut the cake. The filmmakers also shared some pictures from the actor's birthday from the sets, which are going viral. Apart from Vijay, Samantha also celebrated her birthday in Kashmir with the team of the film.

The poster of the film will be released today?
Samantha Ruth Prabhu and Vijay Deverakonda's upcoming film 'VD-11' is a romantic drama. The title of this film has now been changed to 'Khushi'. The film is being directed by Shiv Nirvana and its shooting is currently going on in Kashmir. After Kashmir, Samantha and Vijay will head to Hyderabad, Vizag and Alleppey for the next schedule of the film. If the news is to be believed, today the makers of the film can also release its title and poster.