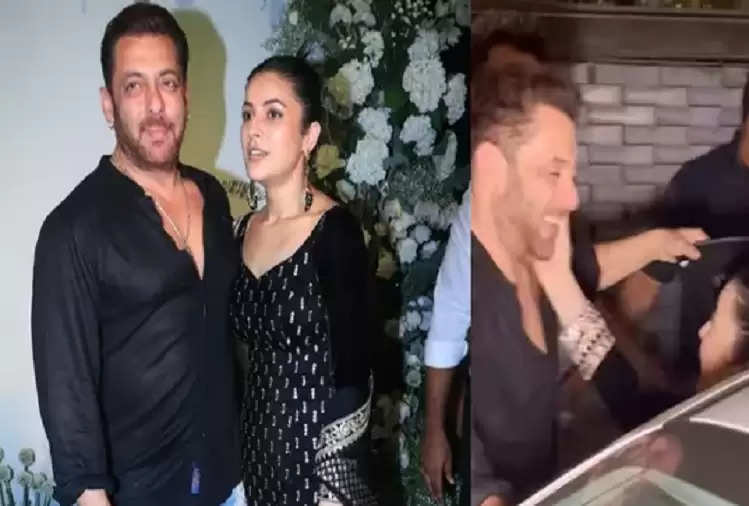 Shehnaaz Gill joined Salman Khan's sister Arpita Khan at her Eid party on Tuesday. In a black salwar-suit, Shehnaaz also twinned with Salman who was himself in a black shirt and denims. She looked very excited to meet Salman and Shehnaaz hugged Salman tightly as she left. Not only this, Shehnaaz, holding Salman Khan's hand, took him along and asked to leave the car.

As the two posed for the paparazzi, Shehnaaz rested her head on Salman's shoulder. Earlier too, the two were seen getting emotional as they mourned the death of Bigg Boss 15 winner Sidharth Shukla.

In a video shared by a paparazzi account, Shehnaaz is seen hugging her before leaving the party. As she moved towards her car, she grabbed Salman's hand and asked him to leave her to the car. After this Salman can be seen following him. Shehnaaz is seen saying to Salman - "Chhod ke aao me" after this Sana says - "You know guys, Salman sir has started leaving me.

Shahnaz's fans liked this video very much. Responded, "Sana is Sana after all. He is excited because Salman sir came to drop him in the car. Our beloved is still the same." Another said, "Only Shehnaaz can do this. That's why I fell in love with him."

Salman and Shehnaaz are now all set to work together. She will reportedly star opposite her brother-in-law Aayush Sharma in the film. Salman and Shahnaz recently met at Baba Siddiqui's Iftar party last month as well.