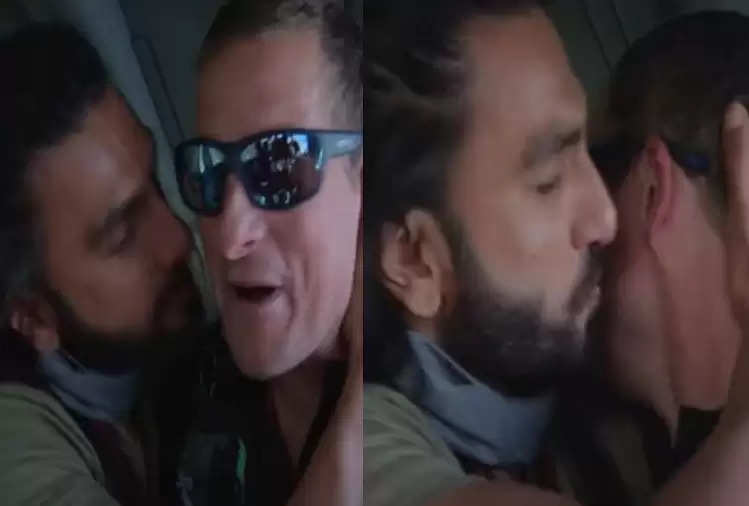 What is #RanveerSingh on?! Why is he trying so hard all the time? First #KoffeeWithKaran7 and now on #RanveerVsWildWithBearGrylls

The way he’s all over the place and over the top describing Sindhi culture or smothering #BearGrylls is neither funny nor entertaining.

However, amidst the positive buzz for the show, a video clip of Ranveer Vs Wild with Bear Grylls is going viral, in which Ranveer Singh is seen kissing Bear Grylls.

A Twitter user shared the clip on the microblogging site and captioned it, "Border Line Assaulted." Soon after, the video was shared by hundreds of netizens on Twitter, slamming Ranveer Singh for his behavior. One user tweeted, "That clip of Ranveer Singh with Bear Grylls is very uncomfortable. What has happened to Ranveer? You can see the restlessness on Bear Grylls' face." One twitter wrote, "Bayer Grylls can file a case of sexual harassment on him and collect crores."

The Ram-Leela actor shared about his experience working with 'Jungle King' Bear Grylls saying, "My first thought was how cool it would be to go to the jungle, something I had never done before. I am so grateful that it was with Bear Grylls who is the king of the jungle. He is the ultimate master of the survival game. There is so much to learn from him."

The 37-year-old actor will next be seen in Rohit Shetty's Circus alongside Jacqueline Fernandez and Pooja Hegde. The film is scheduled to release on the occasion of Christmas 2022. Apart from this, he also has Rocky and Rani's love story with Alia Bhatt, which is slated to release on February 11, 2022.