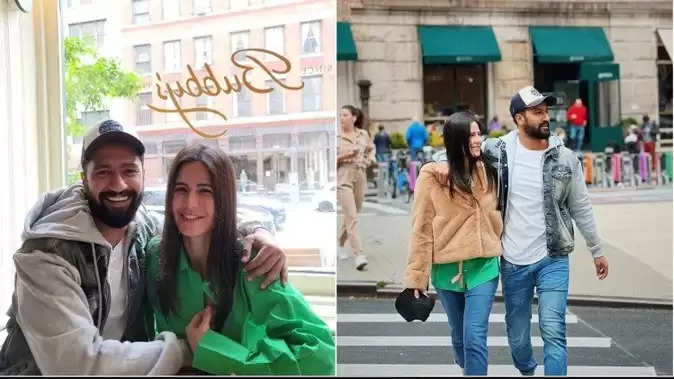 Bollywood actress Katrina Kaif and actor Vicky Kaushal are one of the famous star couples in B-town. Ever since their marriage, these Bollywood stars keep expressing their love for each other on social media. This couple is often seen giving couple goals on the internet. At the same time, the fans are also seen lavishing love on the pictures of both of them. In this sequence, recently this couple has completed five months of their marriage. On this special occasion, the actress has shared some pictures of her five month anniversary celebration on social media.

In the pictures that surfaced, Katrina and Vicky are seen spending time in New York. The actress shared three pictures with her husband Vicky Kaushal a few hours back on her official Instagram account. In the first picture, Katrina was seen posing in the restaurant in a green top. At the same time, in the second picture, Vicky-Katrina were seen smiling and clicking pictures with each other. Apart from this, the actress has shared a picture of a dessert of the restaurant, which the actress has come to taste.

Sharing these pictures, the actress wrote in the caption, "The home of everything, my favorite place ever bubby." Apart from this, actor Vicky Kaushan has also shared a picture with wife Katrina walking on the streets of New York. In this picture, Vicky Kaushan is seen placing his hand on Katrina's shoulder. Sharing this picture, the actor wrote in the caption, Sugar Rush. More than one lakh people have liked these pictures of Vicky and Katrina so far.