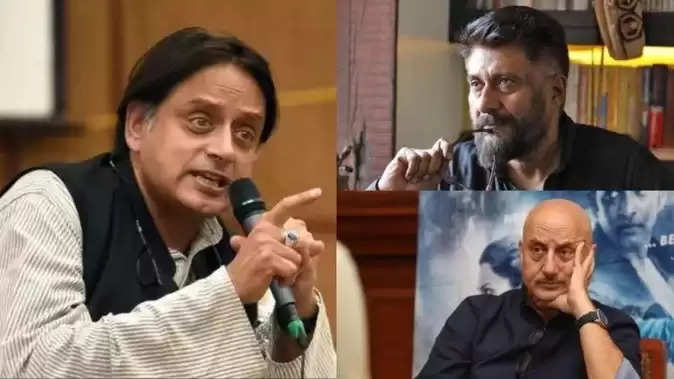 Vivek Agnihotri in his film 'The Kashmir Files' showed the story of the massacre of Kashmiri Pandits, which touched the hearts of the people. The film did well at the box office, after which the film was appreciated all over the world. But 'The Kashmir Files' has been banned in Singapore. There this film has been banned saying that it is a provocative and one-sided film. After this move of Singapore, former Union Minister and Congress MP Shashi Tharoor targeted BJP in a tweet, in response to which directors Vivek Agnihotri and Anupam Kher also tweeted. In this case, both of them mentioned Shashi Tharoor's late wife Sunanda Pushkar, to which Shashi Tharoor has now also replied.

FYI, Singapore is most regressive censor in the world. It even banned The Last Temptations of Jesus Christ (ask your madam)

Even a romantic film called #TheLeelaHotelFiles will be banned.

Know the whole matter first
In fact, after the film was banned in Singapore, Shashi Tharoor took a jibe at the BJP and Vivek Agnihotri by tweeting. Sharing a screenshot of a report, Shashi Tharoor wrote, 'The film which was being promoted by the ruling party of India has been banned in Singapore.' Vivek Agnihotri responded very strictly to this tweet of Shashi Tharoor. He wrote in response, 'Dear Shashi Tharoor, for your information, let us tell you that Singapore is the most retrograde censor in the world. It also banned 'The Last Temptations of Jesus Christ' (ask your madam). Even a romantic film 'The Leela Hotel Files' was banned. Please stop making fun of Kashmiri Hindu genocide.' Vivek also asked in his next tweet that Sunanda Pushkar was also a Kashmiri Hindu?

Dear @ShashiTharoor! Your callousness towards #KashmiriHindus genocide is tragic.If nothing else at least for #Sunanda’s sake who was a Kashmiri herself you should show some sensitivity towards #KashmiriPandits & not feel victorious about a country banning #TheKashmirFiles! 💔 https://t.co/YwEsgYWgc4 pic.twitter.com/b7XRL46tIG

Anupam Kher also took the name of Sunanda Pushkar
Like Vivek Agnihotri, Anupam Kher also gave a befitting reply to Shashi Tharoor's tweet. He wrote, 'Dear Shashi Tharoor! Your indifference towards the massacre of Kashmiri Hindus is sad. If nothing else, at least for the sake of Sunanda who was a Kashmiri herself, you should show some sensitivity towards Kashmiri Pandits and not feel victorious about the country banning The Kashmir Files!'

My statement in response to assorted comments on my tweet: https://t.co/7jlJDu6ZSc pic.twitter.com/ouZEQWoGS4

Now Shashi Tharoor gave this answer
After these tweets by Vivek Agnihotri and Anupam Kher, now Shashi Tharoor has issued a statement, in which he has objected to dragging the name of late wife Sunanda Pushkar in this case. He wrote, 'I shared a factual news this morning, the content of which has not been commented on or the film 'The Kashmir Files' and I have not even seen it. I have never made fun of the plight of Kashmiri Pandits, whose plight I am well aware of. Tossing the name of my late wife Sunanda Pushkar in the midst of all this is wrong and disgusting.