Jeh is one step ahead of Taimur; Kareena's son did something similar by looking at the camera, see VIDEO! 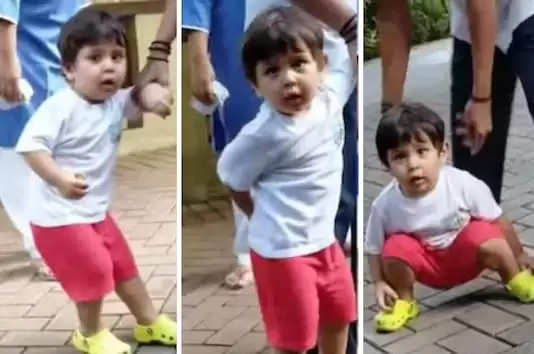 These days more than Bollywood actors, his children are in discussion. These star kids have a huge fan following. Children of Bollywood actress Kareena Kapoor are already in discussion on social media. Kareena Kapoor and Saif Ali Khan have two children, Taimur and Jehangir (Jeh). Both are always in discussion on social media. Earlier pictures of Taimur used to be viral. Now the pictures of Jeh are also going viral on the internet in a similar way. Recently a video of Jeh has surfaced. Jeh is seen insisting to see the paparazzi and the camera.

Saif and Kareena's elder son Taimur runs away on seeing the camera. He doesn't seem too excited about the paparazzi. But for the time being, Jeh is excited about it all. In the video that surfaced, Jeh was going to his house in Bandra. But the paparazzi were already present for the photo.

Jeh was excited to see them in such a state and started walking toward them. On this, the nanny who took care of Jeh was trying to take him inside by holding his hand. But Jah was so excited that he tried to let go of his hand and walk toward the paparazzi. All this fun was captured on camera. At present, this video is going viral on social media. Viral Bhayani has shared this video on his Instagram account.

In this viral video, Jeh is wearing a white T-shirt and pink shorts. On one hand, Taimur now runs away after seeing the camera. He doesn't like taking too many pictures. On the other hand, Jeh looks excited to see the camera. Kareena Kapoor always tries to keep Jeh and Taimur away from the limelight. But somehow Jeh and Taimur get caught on camera.

This cute little video of Jeh is going viral these days. Fans are showering likes and funny comments on the video. One commented, 'Jeh is media friendly and wants to give interviews. Some have called her a cute baby. Many people have said that he is curious about the camera.