Rajnath Singh became the first Defense Minister to fly in Tejas, a fighter aircraft manufactured in India. He also controlled the aircraft. After flying, he said that the captain went on doing what he said. Tejas has been developed by Hindustan Aeronautics Limited and Aeronautical Development Agency. On 21 February this year, DRDO gave the final operational clearance to Tejas at the aero show held in Bengaluru ... 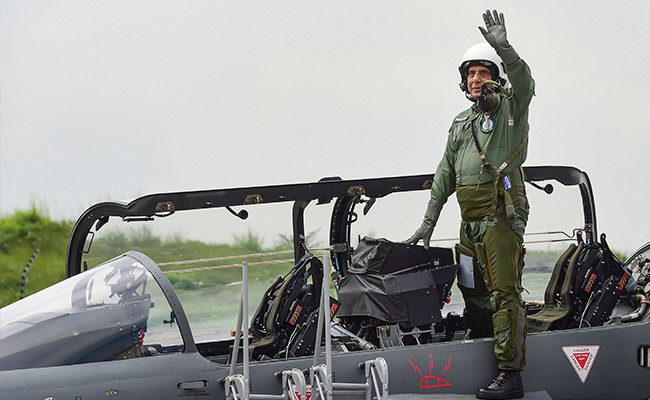 Defense Minister Rajnath Singh flew for half an hour in the indigenous fighter aircraft Tejas on Thursday in Bangalore. Rajnath becomes the first Defense Minister to fly in Tejas Aircraft. He said that flying indigenous light fighter aircraft Tejas from HAL Airport in Bengaluru was a wonderful and wonderful experience. Countries in South East Asia have shown interest in buying Tejas aircraft. We have reached the level that we can export Tejas worldwide. Capt. Narmadeshwar Tiwari said that he (Rajnath) was quite satisfied with the flying quality and smoothness. When the aircraft reached Mach-1 (speed of sound 332 meters per second), I informed them about this.

DRDO chief G Satish Reddy said that the defence minister took over Tejas for a while. Rajnath said that as Captain Narmadeshwar Tiwari kept telling, he went on doing so. In December 2017, the Air Force had assigned HAL to build 83 Tejas jets. Its estimated cost was 50 thousand crores. The Defense Research and Development Institute (DRDO) released its final operational clearance at the Aero Show in Bengaluru on 21 February this year. This means that Tejas is fully prepared for war.

Tejas is built on indigenous technology

Tejas successfully completed a major test to join the Navy last week. Tejas' arrested landing at Goa's coastal test facility was conducted by officials of DRDO and Aeronautical Development Agency. Tejas has become the first aircraft in the country to achieve this milestone. The fighter aircraft is designed and developed by Hindustan Aeronautics Limited (HAL) and the Aeronautical Development Agency. Tejas is part of the 45th Squadron 'Flying Dragors' of the Indian Air Force.

Not medicine or vaccine, corona can also be treated in this way, AIIMS started research

Now this bad news about this veteran Congress leader! Click here to know

Hina Khan appeared in the bride's dress, posted her photo on social media

Rakul Preet Singh wants such a life partner for marriage, the actress told about what features she wants in the boy

Farah Khan did not charge fees for choreographing the title track of Sushant's film 'Dil Bechara', know why

Covid-19: Elderly people are twice as active as a youth in Corona period, study reveals