On November 14, the birthday of Jawaharlal Nehru, the first PM of the country, is celebrated as Children's Day nationwide. He was very famous among the children and the children used to call him Uncle Nehru. He was very simple in appearance, but his style of living was quite luxury.

In this story, we are going to tell you one-day expenses of Pandit Jawaharlal Nehru and about which brand of cigarette he smoked. Political opponent Dr Ram Manohar Lohia had told about this figure at that time.

Lohia wrote that 70 per cent of the people of India live on less than 3 visits per day, whereas spending 25,000 rupees every day on the Prime Minister of the country is extremely shameful. Not only this, they are given all this money from government expenditure. But who knows how much truth is there in this claim of Dr Ram Manohar Lohia. 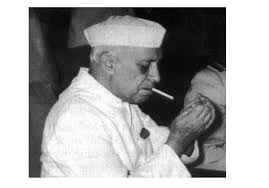 Used to smoke cigarettes of this brand

He smoked the famous cigarette brand State Express 555 of that time. Apart from this, he never smoked a brand cigarette.

China invades India in the dark of night with deceit during peace talks, know when and what happened

He did this with his wife first, then ...! Click here to know the whole matter

Parents will have to pay school fees, a big blow by the High Court

Investment or insurance: Know what is more, important in financial planning

With the help of WhatsApp, you can handle these banking tasks from home, know which facilities are available and what is the charge

To keep the stomach cool and for proper digestion, mixed veg raita is the best option

Enhance the taste of food with this 'Garlic pickle', it also increases health

Protein-index: Proteins are necessary for boosting the immune system during the COVID period

Bollywood Style Sunglasses: learn how to style sunglasses from these B-town divas

Short hair fashion is trending again, Take tips from these actresses to get a stylish look

Beauty Hacks: Do you want to know the 5 secrets of Tamannaah Bhatia's beauty?

Ananya Pandey's neon style statement is perfect for this summer, you can also try this look