India's mission was just a step away from Chandrayan's success when Vikram Lander lost contact with ISRO just before it suddenly landed on the lunar surface. There was silence in ISRO Center. The whole country was disappointed. But this disappointment did not last long. PM Narendra Modi himself encouraged the ISRO chief by embracing Siwan and told him that we are with you. Veterans like Rahul Gandhi, Priyanka Gandhi, Amit Shah also strongly encouraged Indian scientists. Now a piece of news has come that you will get emotional after knowing it. A 10-year-old child wrote a letter for ISRO. In which he wrote some things to encourage ISRO. The name of this child is Anjaneya Kaul. The mother of that child shared her letter on Twitter. After which this letter became quite viral. 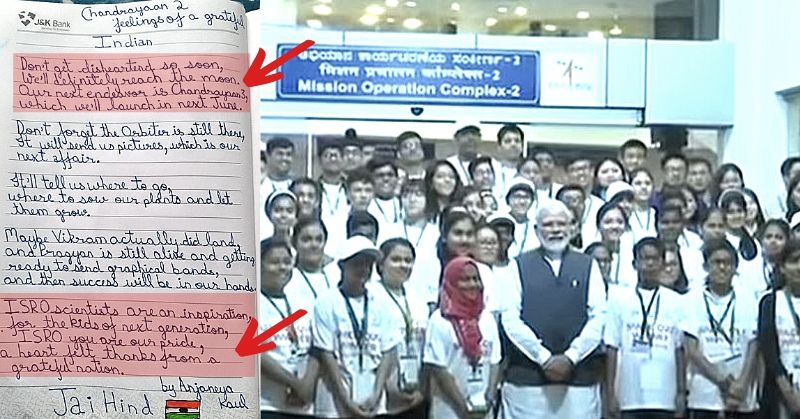 Know what the child has written

The child wrote in the letter, "Don't be discouraged so soon. We will arrive on the moon. We will launch the Chandrayaan-3 in June next year. Don't forget that the orbiter is still there. He will send us pictures so that our next step will be fixed. Maybe Vikram has landed or Pragyan is still alive and is getting ready to send graphical bands. Then success will be in our hands. " 59 Chinese apps banned: Under 10 points, understand why the government took this decision, how it will be implemented and what will be its effect now

Now the poor will get five more months, PM announced

Bihar: Father and son died of corona in Nawada, stir in the entire locality

Corona epidemic spreading through the air! 239 scientists claimed it

Jashodaben, the wife of PM Modi, is a very simple woman!